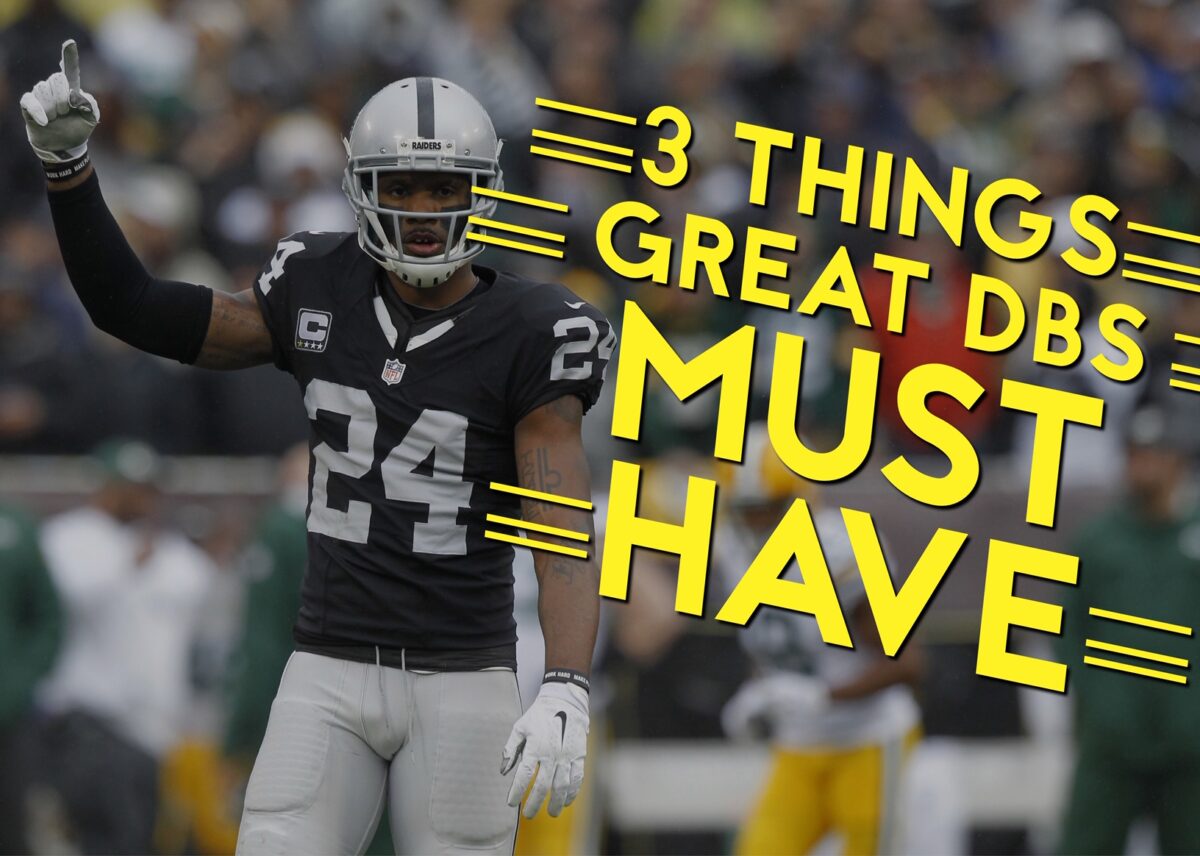 So you want to be a great defensive back right? Well, as I have told you in countless articles on this site, it’s going to take some hard work. Playing DB is not easy but the thrill that comes with the success one achieves by mastering the position has few equals in the feeling department.

Defensive backs have thrived at the position with all kinds of different attributes. Some have been tall, others not so tall. Some have been vicious hitters, while others would just get you to the ground without trying to end your career. Despite the contrasts in tools and styles, there are some things that I have found to be constant in all of the defensive backs that we have called great. In the interest of giving this article a focus, I have narrowed down those tools to three of what I have found to be the most important.

Notice I did not say fast. However, I am not saying slow either. There have been some great defensive backs that have not had World class speed (far from it). This does not mean that they weren’t athletic. You simply can’t be at the top of playing this position and not be athletic. Typically the guys who weren’t fast had some solid change of direction or leaping ability. These things fall under the category of being athletic. Chasing a wide receiver around the field requires that you not be born with two left feet. Having outstanding speed will certainly be a major plus but being athletic is an absolute must. What you will find out about many defensive backs is that they played multiple sports in high school and many of them were exceptional in another sport other than football. If you are going to defend the air ways you have to have some bounce to you.

Can you survive at defensive back without awareness? Yes you can but you won’t ever be called great. You can be a hyper-athletic speed guy that the rest of the secondary or some coach will have to babysit. This kind of player will eventually drain the energy of the people around him and will get called a bust. Deion Sanders, Ronnie Lott, Ed Reed, Charles Woodson, Rod Woodson, Darrelle Revis, Richard Sherman, you name it, all would get high marks in the area of awareness. Some of these guys were all time athletes but didn’t choose to just rely on that. They coupled that athleticism with outstanding instincts to be in the right place at the right time. Some others on the list of names I just rattled off had some physical shortcomings but made up for it with a football IQ that was off the charts. You simply can’t be the best at this game without knowing what’s going on around you. Athletic talent can only take you so far.

The easy thing to put as the third skill would be something heroic like a “tremendous burning desire to win.” That sounds good when said with a deep voice over a symphonic melody. That kind of stuff goes without saying for all players. I wanted to be specific to playing the position of defensive back. As such, great defensive backs have really good ball skills. How many times have you been frustrated with a player who doesn’t get his head around on deep balls or makes a habit out of dropping can’t drop interceptions. This does not happen with great defensive backs. Many of the greats could have made a living playing wide receiver. Even the ones who don’t or didn’t have 5 star hands, at least know how to track the ball and get a hand on it so that the wide receiver they are covering can’t. Ball skills don’t just involve the actual catching of the ball but also involve tracking and judging the ball as it arrives. Guys who struggle with that eventually have to find another position or sport.

So that’s it. Now ask yourself how you measure up in those very important defensive back skills? Whether you have a shortage in those areas or not, you need to be making sure that you continue to work on those skills. The good thing about these three skills is that they are things you can control. I did not say you needed to be tall or have exceptional speed. Those things might be hard for you to obtain from a genetic standpoint. Everything I mentioned in this article can be achieved if you are willing to put in the sweat equity to obtain it. Time to get to work.