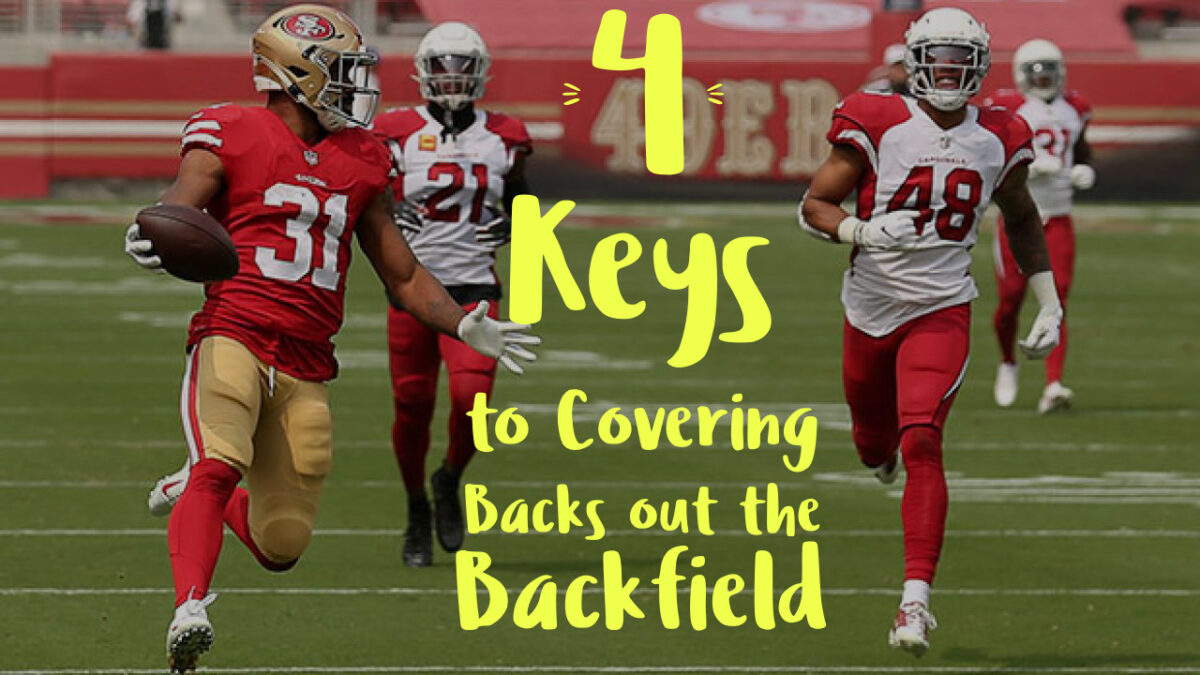 One of the most menacing things to defenses over the last few seasons has been the running back’s involvement in the passing game. If you’re playing a ton of zone, he becomes a check down that runs for first downs. Play him man to man and with one wrong move he could go 80 yards for a touchdown. This article will show you how to protect yourself from the latter.

As we all saw on Sunday, San Francisco’s Raheem Mostert toasted the Arizona defense for 71 yards on a simple route out of the backfield. Of note was Arizona having super athletic “defensive player’ rookie Isaiah Simmons covering Mostart man to man. No matter how athletic you are, if you aren’t deploying the proper technique vs. a route running back, you will have major issues. The principles I am going to detail for you in this article are easier said than done, however, there are few, if any alternatives. When mastered and executed properly, your value as a defensive player rises dramatically.

(1) Stay Square to the Line of Scrimmage

This one is the hardest of the four. The reason for that is that it takes courage. Having a back screaming out of the backfield at you without the ability to open early and match his speed down the field is nerve wracking. However, opening early and closing yourself off to one side or the other is what the back feasts on. Many of the routes out of the backfield are option routes. So when you open to the left, they go right and vice versa. The longer you can stay square and patient, the longer you delay his decision and ruin the spacing + timing of the route.

You can achieve this objective in two ways. First you can set up and shuffle side to side as the back approaches according to his left to right movement. This is more of a “catch technique”. I recommend this for the more physical types. The other method is the “scooch method” where you give ground slowly while staying relatively square. This allows you to buy time and attempt to close on any breaking route while giving yourself some insurance against a route that goes vertical. I will expand on the details of the scooch technique in a future article. I recommend this technique for guys who have good feet and may be a little less physical than say a hardcore linebacker. Ultimately, you defeat the wide amount of space the back has by remaining square in it. A soccer goalie does not defend the wide net by facing one way or the other. He defends it by staying square until the ball is kicked.

Whether you are using the catch or scooch technique, the mindset should be make contact. If you are in high school or college where the rules of play are different then the contact you seek can be more intense. If you are a pro where contact beyond 5 yards is frowned upon then you will have to adjust your technique slightly. Either way, if you don’t have the mindset of “make contact” then you will undoubtedly open too early and allow the back to play you. By that I mean he will most often attack your back and spin you around putting you in bad position. To make contact you have to think “contact” like a baseball player in the batter’s box. If he doesn’t think contact, there’s a good chance he’ll bail out of the box and won’t have any chance of striking the ball with his bat.

This is where knowing the coverage and the situation comes in. It’s also how smart football players win in the game of football. Each coverage has it’s help built in. Cover 1 has help in the post and sometimes in the low hole. 2 Man has help over the top on either hash. Bracket coverage has help either inside or outside. Even cover 0 has help in that the ball must come out quickly. A dumb defender lines up without knowing where the help is. A smart one is aware of it and guides the back to that help. For instance, a player knowing he will have a robber in the middle of the field could stay square but on the outside shoulder of the back releasing. This should induce an inside release where you can now squeeze the back to the robber forcing a pinpoint throw by the QB or offensive disaster will ensue. A defender with no inside help should switch to inside leverage and force the longer throw to the sidelines.

Finally, the most important of them all. Keep your eyes low. This is also hard to do but ultra critical. As a play unfolds and there is such a delay before the back reaches you. It is difficult not to peek at the QB or raise your eyes to the head and shoulders of the running back. I understand all of that but I am here to tell you “DON’T DO IT!” The moment your eyes get high, get ready to get ran by. Keeping your eyes low on the hip of the back allows you to zero in your focus and react quicker to his change of direction. This puts you in better position to mirror him, get close and make contact. Once your eyes start rising you start seeing too many things. You will be mesmerized by what may be unfolding behind the running back. You will be caught up in the head and shoulder fakes that move much faster than a hip. It will also lead to panic. If you can train your eyes to get low and stay low at least until contact then you will see a dramatic increase your ability to cover backs out of the backfield.

As I said, these things are easier said than done but if it were easy then anyone could do it. Like all skills on the football field, they will require some extra time, effort and drilling to master. However, master it you must if you want to be elite.

Check out this clip of Simmons in coverage vs. Mostert and ask yourself based on this article what things he could’ve done better.

Raheem Mostert hit 22.73 MPH on this 76-yard TD catch, per @NextGenStats. That’s the fastest speed by any ballcarrier since Tyreek Hill in 2016 💨 💨 pic.twitter.com/oP1YkxAh6j

I have more information on catch technique and man coverage + more in my Member’s Area. I highly recommend that you join if you are serious about reaching your potential as a defensive back. It’s well worth the investment. Click here to join.