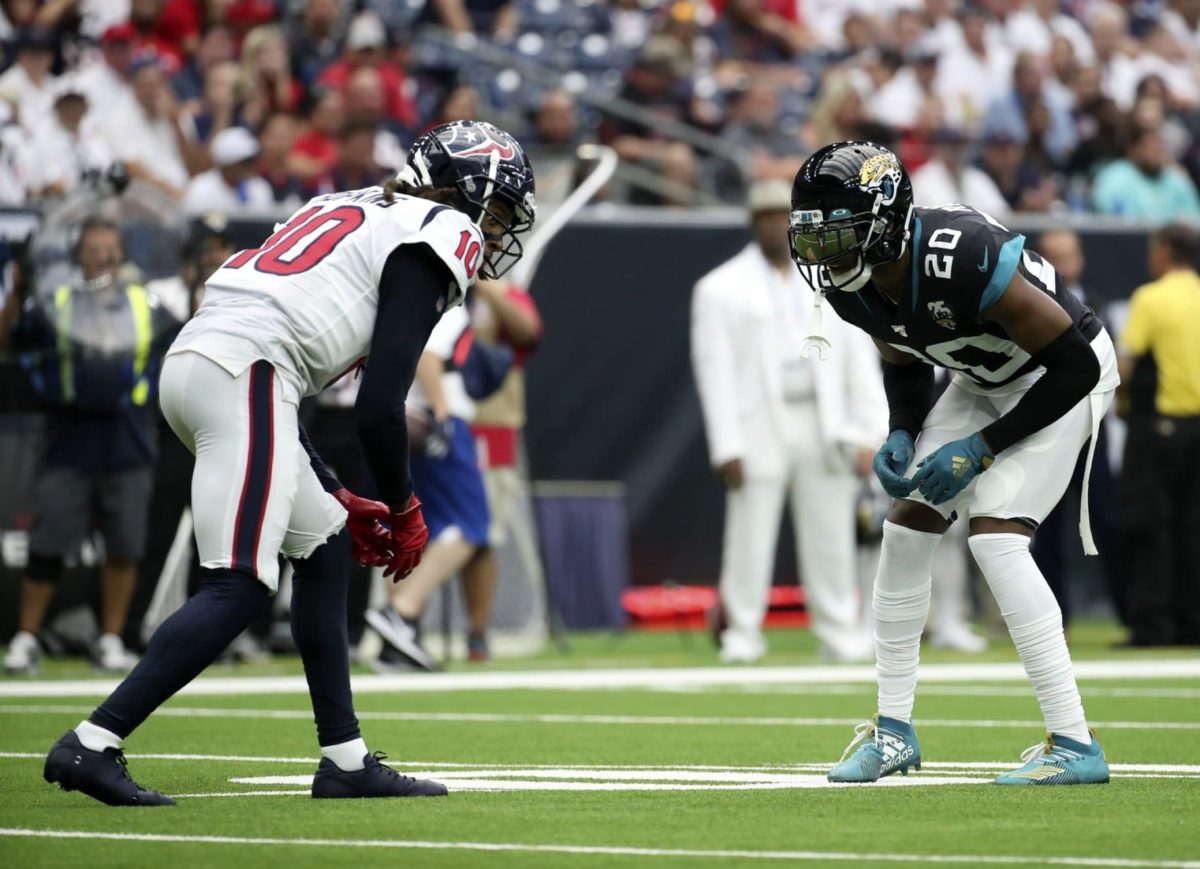 If you ever lined up to race someone or stepped in a batter’s box to hit a baseball,  you are aware that before someone yells go or a pitch is thrown,  you could win or lose.  Have your feet in the wrong spot and you will come out wrong in that race.  If you hold that bat in the wrong spot or line your feet up incorrectly and you’ll never touch that baseball with your bat.

In a similar fashion,  your stance in press man can set you up for victory or failure before the ball is even snapped.  With that in mind,  let’s talk about four common mistakes defensive backs make in their stance when they play press man.

Few good things happen in life and athletics when you have a hump in your back.  That means,  shoulders slumped in,  stomach tucked in and hips almost pointing upward.  There is very little power in such a position.  Any athlete in such a stance would find it extremely difficult to deliver a powerful blow with their hands or burst from one spot to another when their spine is throwing up The U.

Can some people survive like this?  Yes.  Would they be better if they didn’t?  Certainly.  A stance made for winning starts with your chest out and your hips facing straight ahead.  Now you can strike with your hands to redirect a wide receiver with some authority.  You wouldn’t slouch your back to squat 300 lbs.  Don’t do it to press a wide receiver.

Don’t send me any old clips of Deion Sanders.  When you are arguably the best athlete to ever play the game,  you can line up with your feet like they are at opposite ends of a surf board.  If not,  take my word for it,  get your feet at or somewhere near shoulder with apart.  You can ill afford to waste time,  pulling your feet back in to plant them,  to redirect them to respond to a wide receiver’s exit move.  You can try just to buck conventional wisdom but who wants to waste the time.  Get your feet under you so you can have some lateral balance.  You must be ready to move with power on those initial moves by the receiver.  You can ill afford to waste time bringing yourself to balance before you go chase the hip.

(3) Too Much Weight on Your Toes

I see this one a lot and some trainers may want to argue with me on this.  Again,  balance is key.  You can not be at the line of scrimmage waiting on your toes for the offense to snap the ball.  You will not be on balance.  If you want to dispute me on this,  go look at a baseball player in the batter’s box or watch a basketball player in front of a player with the ball before they have made their move to the basket.  Neither athlete is up on his toes waiting.  They will have both of their feet firmly planted on the ground.

To effectively push in one direction or the other,  an athlete must have his whole foot on the ground.  One of the most explosive things an athlete can do is dunk a basketball.  To get up in the air,  he will plant his entire foot on the ground to lift up to the basket.  He will not be placing only the ball of his foot on the ground.  Now that you know this,  there is zero advantage to being up on your toes like you have on high heels waiting for a wide receiver to explode off of the line of scrimmage.  If you are a player,  stop doing this.  If you are a coach,  stop coaching this.  It puts the DB at a disadvantage. If nothing else,  you run the risk of losing your balance waiting for the snap and taking a false step at the time the ball is actually snapped.

Now this can be flexible,  to a point.  When I am working with new defensive backs,  I often have to tell them to get lower in their stance.  I also tend to emphasize this more since we are not working with pads on.  Whatever your stance is in shorts,  you will likely be higher with the weight of equipment on.

So why lower in your stance?  You have to effectively load your quads and hamstrings to push out left, right or back.  There’s no way around that.  There’s the old saying ‘if you stay ready,  you never have to get ready.”  If you are too high in your stance,  you will have to bend anyway once the WR moves so that you can load the leg muscles to push in the necessary direction.  So do you want to waste the extra half second doing that or do you want to save yourself that precious time by already having the proper depth?

The other thing that being low enough gives you is horizontal balance.  If you’re too high at the line,  there’s a chance a wide receiver can come off the line into you and put you on your back.  It’s not a move they do often but they will do it.  If it’s done to you once,  you will never ever want it to happen again.  God forbid if it’s on film and hits the dozens of social media networks hungry for content.

Your stance in press man is about power and comfort.  Practice the first part so that you can achieve the second part with the proper alignment.  Practice being lower, with your feet closer together,  with your chest out and your feet under you.  Get comfortable doing that so that when the time comes,  your comfort level exists in a stance that readies you for success.

For more on your stance,  check out the video below I put together on YouTube.