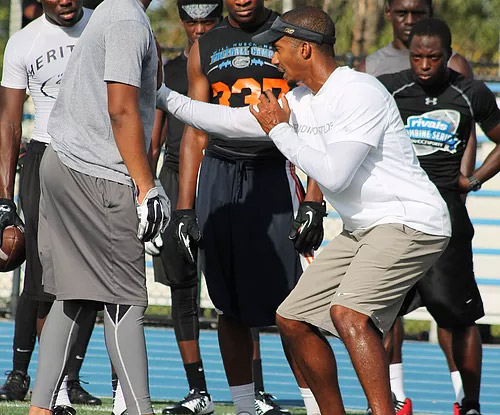 I was recently asked by a new member who was excited to gather in all the knowledge where he should start.  He was not the first to ask this question but finally,  I decided to put up a post about how a member,  especially one that is new,  should approach their membership.

If you have ever trained with me you know that I am big on the basics.  Playing defensive back is a bunch of repetitive moves like back pedaling,  breaking and flipping your hips.  A game consists of you doing that over and over again.  It simply stands to reason that the more you execute those moves in practice,  the better you will become at them and the less you will have to think about them when the time comes in a football game.

With that said,  without question,  the first place you need to go when you become a member of this site is to my Masters of the Basics series.  In part I,  I show you the core drills I used EVERY DAY when I was coaching defensive backs.  Every practice began with these drills.  Why?  Because these were the things you were going to do the most out on the football field.

Part II of Masters of the Basics shows my W drill series.  Many of you are familiar with the W drill as a drill where you back pedal and break.  I take it a step further in this series by also adding shuffling and cross over running in the drill.  It nails down the ultra important basics of footwork when coming out of a break in all 3 situations.

Part III of Masters of the Basics talks about my 4 cone drill series which again discusses crossover running and shuffling.  It adds onto the basics of coming out of your breaks in those two situations that you will undoubtedly find yourself in during a game.

My Masters of the Basics series can be found by clicking on the DB / LB Drill category and going all the way to the last section as it was the first videos I put in that section.

Now that you understand the basic moves involved with playing defensive back,  it is important that you have a firm understanding of how defenses work.  If you don’t know how to play the defense then your coach simply can’t put you on the field.  So,  head over to my “Coverages Explained” category and read the various articles I have on common football coverages like Covers 1, 2, 3 and more.  Understanding how defenses work make you a better playmaker.

Next,  if you are a cornerback,  most likely you are going to be asked at some point to play press man.  Playing press man involves mastering of a few basic things.  Once you master those things you can apply them to almost any man press technique that you or you coach wants you to play.  Not every coach plays press man the same,  however,  there are basic things that apply to all the different techniques.  Go to my Press Man Drills category and find my 3 part series called “Outstanding Press Man Drills”.  It is a breakdown of the major press man drills that I use to train defensive backs.

If you are a safety or nickel back that is put in man to man situations vs. slot WRs then I have several posts in this member’s area on playing catch technique in the slot.  In several of those videos I discuss why I use catch technique and also walk you through the steps on playing it.  You can find those videos in the Coverages Breakdown section.

Finally,  where you go from there is up to you.  Outside of technique posts and coverages explained,  I try to discuss situations that defensive backs find themselves in during games and offer explanations on how you can find yourself in a better situation.  That’s the essence of the game.  So scroll through the categories and recents posts to find something that applies to you or that you find interesting.

Outside of that,  I am always open to suggestions, questions and feedback.  You can do so by sending me an email to: cwilson@alleyesdbcamp.com