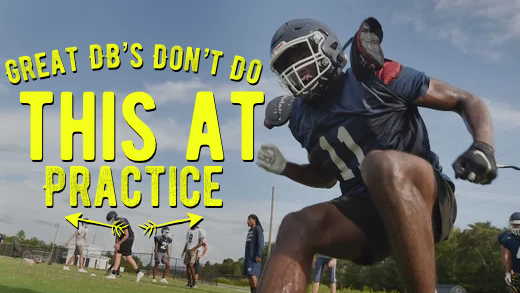 We’re talking about practice. The word and term practice took on a whole new meaning when former NBA great Allen Iverson went on a rant in front of reporters about the lack of importance of practice.

Many misunderstood Iverson’s rant as blowing off practice as a key ingredient to success. Iverson was often misunderstood during his playing days. I’m obviously not here to try and tell you what was in Iverson’s head but for any of your familiar with it and took it the way that it was widely interpreted, I am here to tell you don’t do that.

Practice is an important element to a player and team’s success. In anything in life, preparation is key and that most definitely relates to the game of football. However, let’s not just skim the surface of that statement in this article. For defensive backs, there are some parts of practice that are more fun than others. 7-on-7 is probably the most fun, followed by team pass period and some contact loving safeties enjoy inside run if they are involved in it. However, in both my playing and coaching career, I have learned that the individual period is the part of practice that is most commonly disliked. That sucks you know why? Because the individual period is the most important part of practice.

Here are some of the reasons why players don’t like it. It’s early in the practice and you aren’t fully into things yet. The drills can be tiring. It often involves much of the same drills every day so it’s boring. The coach is typically able to watch everything you are doing as opposed to other periods where you may get away with being lazy. Here are the reasons why the “indy” period, as it is called, is the most important. It gets your juices flowing so you can perform to your best for the rest of practice. The drills build the strength and endurance of the muscles you need to develop. It allows you to practice drills repeatedly so that you can master them for the game situations. You get more attention from the coach therefore you are getting the best and most intense coaching of practice during this period.

I was a player once. I had those days when I was not looking forward to the indy period. However, I can say that I typically liked it more than most players. I realized early on that it was a chance for me to master certain skills to the point of not having to think about them in other parts of practice and more importantly in games. I did not like having too many things to think about in the game. The more singular my focus, the faster I was able to play.

Once I became a coach, the individual period took on a whole new meaning. As a coach, you see a whole lot of things your players can and need to improve on. This is the case even when you have a group of All Americans. As a coach, it is often a fight to get enough time in the schedule for your indy period. You are trying to correct as many of the mistakes in techniques that you can with a limited amount of time. I am here to tell you that there is never enough time when you are a coach. When the horn sounds to end the period, you always come away feeling like you didn’t get it all done. Therefore, you tend to get really pissed off when a player or players either go through the drills half assed or just plain mess them up wasting the limited time you do have.

If you want to end up on your coach’s bad side, try “dicking around” (that’s a legal football term) during his indy period. If your coach has a viable replacement for you, he will definitely look into using him. Your technique and knowledge of the system is a direct reflection on your coach. The individual period is where he teaches that the most. If you don’t look good, he does not look good and he will have to eventually get you out of there or severely limit your role.

If you want to reach your peak as a player, you have to take your individual period seriously. Play whatever mind game you have to with yourself to love it. What you do repeatedly in the individual drills and period is what you will eventually become. Going through the motions in your drills during the indy period will eventually make you a mediocre, half assed, going through the motions player. It’s only a matter of time before it catches up to you. If you want to be the best then seek a way to improve on those drills each and every time you do them. You can back pedal smoother, you can get out of your breaks faster and you can definitely catch the ball more consistently even if this is your 10th year playing the game. Start doing that from now and watch how consistency will start breeding results.

Try These Other Related Articles