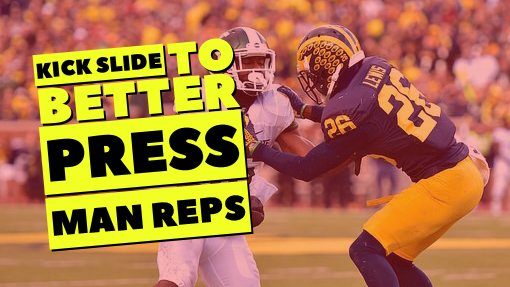 I see it all levels of football. A defensive back is lined up in press man, he panics on the wide receiver’s movement and then he just turns and runs. Once this happens, it’s a win for the wide receiver. The pass may not get completed but he has put himself in a great position to catch a thrown football than if you would have denied him the “free release”. In this article I am going to tell you how to charge the WR a fee for exiting the line of scrimmage and not giving him anything for free.

For those unfamiliar with the term, a free release is when you allow the wide receiver to go by you in press man without having to really change his path or disrupt his timing. Another term for this would be “opening the gate”. One of the big reasons this happens is because the defensive back may not have been taught what to do when the wide receiver declares his path and seeks to get beyond him. After this reading this article, you will no longer be able to make such a claim.

One of the best ways to widen a WR’s release at the line of scrimmage is to use a kick slide. Using a kick slide will stop you from crossing over and opening your hips too soon and allow the WR to go by you too skinny. If you have ever watched a basketball game and watched a player defend the man with the ball to keep him from driving to the hoop, you may have noticed a kick slide. This would involve keeping hips and shoulders square while taking shuffle steps to move with the ball handler. This is primarily the same when playing press man vs. a wide receiver. At some point he is going to want go by you the same way a basketball player with the ball will attempt to do vs. a defender so he can get to the hoop. The WR will want to get by you to get to the field behind you and to his landing point for the pass. The better that defender is at staying square, the less chance he has of getting crossed over by the ball handler which can be quite embarrassing.

A good kick slide will keep you in front of the wide receiver longer and give you a better chance of getting hands on him should he decide to change direction. To execute a solid kick slide, there are three key components.

It all starts with your stance. If you are not properly prepared to move then you will fall behind the WRs release and your kick slide will likely never happen. A poor stance will make you panic and cause you to open your hips too quickly. So, it is important that you have your knees bent and your chest out in your stance. The bent knees prepare your thigh muscles to activate and push in either direction once the WR moves outside of your frame. The chest out keeps you in a power position so that you can move explosively left or right or throw your hands with power should that WR decide to come right at you.

While in some cases, it is good to slide left or right straight across, we don’t do that with a kick slide. Shuffling at a 45 degree angle is ideal in the kick slide so as to not get caught at a bad angle and end up in chase mode. By sliding at a 45 degree angle, you give just enough ground to stay close to execute a jam while not opening too much to allow the WR to explode past you. Being able to kick slide 45 degrees in one direction and then plant to move back in the other direction suddenly is a great skill. This skill must be practiced often and it involves good upper body mechanics. Once again, keep your chest out but also keep a rigid upper body. Don’t let your shoulders drift outside of your hips as you kick slide. Doing so will make it difficult to get your body to head in the other direction should you need it to.

Focusing on those three elements during your kick slide will keep you in a good strong position. This will force the wide receiver off the line he would like to run, disrupt the timing and the spacing of his routes. If you are doing that consistently then you are putting yourself in good position to defend the passes that are being thrown to your man.

Check out the video below that I made on having a great kick slide. For more information and detail on playing press technique the right way, join my member’s area where I have well over 100 videos on drills, technique, coverages, analysis and more. Click here for the All Eyes DB Camp Member’s Area