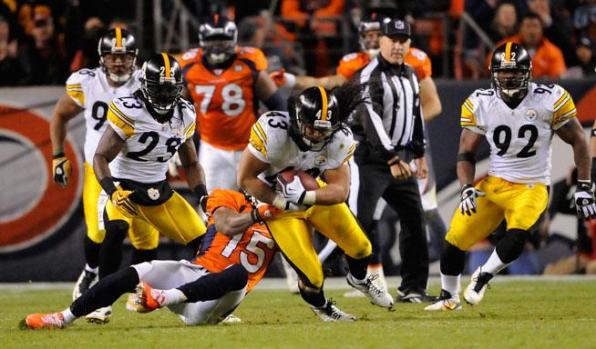 Many of our most recent generation may only know Troy Polamalu for his hair but he was so much more than that on the football field.

Though he was born in California,  Polamalu played his high school football in the state of Oregon.  Oregon is hardly a hotbed for college football talent and besides the fact that missed much of his senior season due to injury,  Polamalu was named Super Prep in 1998,  a prestigious honor back in those days.  Polamalu played running back and defensive back as a prep.  In his junior season he rushed for 1040 yards,  had 22 touchdowns and 8 interceptions. He also participated in baseball and basketball while at Douglas High School in Winston, Oregon.  After fielding several offers during his senior season,  Polamalu returned to California to play for the USC Trojans.  Polamalu was quoted as saying “I was named Troy for a reason.”

Polamalu’s career at USC was not eventful as first.  He was primarily a special teams contributor as a freshman.  However,  he did make his impact felt as a member of those special teams.  His hustle and determination caught the eye of the Trojans coaching staff.  Polamalu would be named the starter the following season.  The rest,  as they say,  was history.  Polamalu’s rise coincided with the Trojans’ rise through the college football ranks.  USC was buried for several years from spotlight but during Polamalu’s time,  USC would take over college football.  His “hair on fire” style of play made Polamalu a leader on the USC defense and spearheaded their return to glory.  During his career at USC,  Polamalu had 278 tackles with an amazing 29 of them for a loss.  He also had six interceptions,  4 blocked punts and 3 touchdowns.

After his spectacular career as a Trojan,  Polamalu displayed his athleticism for scouts when he ran a 4.34 forty at USC’s pro day.  With the 16th pick in the first round,  the Pittsburgh Steelers chose Polamalu and thus began his Hall of Fame career.

By his second season,  Polamalu became the starter for the Steelers.  Much like he did in college,  he played with tremendous heart and fire.  He ran around the field as wild as his hair flowed from under his helmet.  Polamalu was a big risk taker at safety.  Whether he was playing deep centerfield or near the line of scrimmage,  he was the type to just go for it.  Many a time he would fly out of the post to go break up or intercept a pass.  He became famous for jumping over lineman at the snap of the ball or dashing into the A gap to sack the quarterback.

Much like his time at USC,  Polamalu’s time in Pittsburgh coincided with better defensive play and championships (see video below).  The Steelers became fixtures in the playoffs and would twice win the Super Bowl during his 12 year NFL career.  Because he did not rack up massive interception numbers like Ed Reed and Charles Woodson,  Polamalu has been slightly maligned in his post NFL career.  He ended with 32 interceptions and 770 tackles.

Though different in stature than his Hall of Fame classmate,  Steve Atwater,  much of their career is similar.  Polamalu played near the line of scrimmage often which does not lend itself to a ton of interceptions.  However,  he was extremely effective and impactful in that spot.  Polamalu amassed 56 tackles for loss during his career along with 12 sacks.  He also forced 14 fumbles which are all numbers amongst the best of any of the other safeties to have played the game.

Like Atwater,  Polamalu was a Pro Bowler 8 times and was named to the All Decade Team (2000’s).  He was named All Pro four times and on February 1, 2020,  he received the ultimate honor of being named to the Pro Football Hall of Fame.