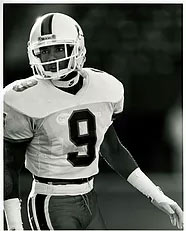 All Eyes DB Camp is owned by Chad Wilson. Wilson has been coaching, teaching and mentoring football players at the youth, high school, college and professional level for over 14 years.
​
Wilson was a standout running back, defensive back and return man at Canyon Spring High School in Moreno Valley, California where he earned all All Riverside County, Mountain View League and CIF honors his senior year. After high school Wilson received a scholarship to California St. University Long Beach to play for legendary coach George Allen. Wilson started several games as a freshman at Long Beach St. and enjoyed a solid career as a 49er before the program cut football at the conclusion of the 1991 season. After being heavily recruited, Wilson received a scholarship to play for the defending national champion Miami Hurricanes. As a Hurricane, Wilson earned All Big East honors his senior season after nabbing 3 INTs and 11 PBUs as a key member of the #2 ranked pass defense in college football in 1994. Wilson signed with the Seattle Seahawks as a rookie free agent after college and spent one season with the club.

In his seven years coaching defensive backs at the high school level, 15 of his athletes have gone on to play Division-I football, four have been Rivals Top 100 rated athletes and for the only time in recruiting history, Wilson coached the #1 and #2 ranked cornerbacks in the country in Patrick Surtain (Alabama) and Tyson Campbell (Georgia).
​
Throughout his time as a coach, Wilson has trained athletes in offensive and defensive techniques as well as speed training. However, coverage technqiues for cornerbacks, safeties and linebackers is Wilson’s specialty. Wilson has worked with the likes of Tony Villani of XPE Sports, Ken Mastrole of Mastrole Passing, Fit-Speed performance training in Weston, Florida as well as with coaching staffs at the University of Miami, Florida, Alabama, USC, Ohio St., Auburn, Florida St., Notre Dame and South Florida. Wilson has also been a solid member of the elilte 7-on-7 South Florida Express team serving as both offensive and defensive coordinator.
​
Wilson’s two sons are defensive backs. His oldest, Quincy Wilson is a former starting cornerback for the Florida Gators and current starter for the Indianapolis Colts after being selected in the 2nd round of the 2017 NFL draft.  His younger son, Marco, was a 4-star rated cornerback at American Heritage School and was named All SEC Freshman team as the starting cornerback for the Florida Gators in 2017.
​
Wilson also owns the highly popular college football recruiting website GridironStuds.com.

Chad Wilson & All Eyes DB Camp in the News