One of my secret pet peeves is hearing a defensive back who did nothing during a game tell me he couldn’t make a play because “they didn’t throw to my side”. 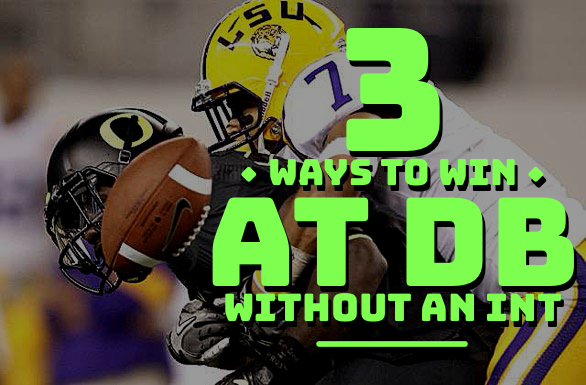 One of my secret pet peeves is hearing a defensive back who did nothing during a game tell me he couldn’t make a play because “they didn’t throw to my side”. Every time I hear that, in my mind, I am thinking that’s a cop out.

True playmakers don’t think that way. If they practiced all week to play a game, they are damned sure going to get paid when game time comes. So whether or not the offense decided to actually target your side or your area, the fact still remains that an entire football game was played on the same field you were on so it’s time for you to show up. Simply running and staying with your man when a play has clearly gone elsewhere is not being the best you can be.

With that in mind, some defensive backs may not actually be aware of ways they can become a factor in the contest even when “their man” is not being thrown the ball.

Well, first of all, you can affect the game by providing solid coverage especially on a team’s top wide receiver. Taking away a team’s top weapon can severely hamper the game plan for an offense. However, this doesn’t just apply to man coverage. When you are in a zone, be where you are supposed to be consistently. Abandoning your zone to do someone else’s job is not the way to go. Being in your area and communicating well to your teammates can put them in the proper place as well. This can either set your teammates up for an interception or in most cases, set the front seven up for a sack. Either one of those results are a win for the defense and helps your team move closer to victory.

This seems elementary but some defensive backs, cornerbacks in particular, think their play is over the moment the ball is thrown or run somewhere else and not to their man. That is not the case. When the play goes away from you, it is time to leave your man, get to the football and make a play. Good things happen to those who run to the football. When a ball is completed or run elsewhere, there’s a chance that you can sprint to the football and scoop up a fumble before a member of the offense does. You never know when that fumble recovery turns into points that turns the game around. The next thing is getting off of blocks when the play comes your way and making tackles. For cornerbacks, just because your coach told you that you are sticking one man in particular in the game does not mean that you get to not doing anything else. Making no effort to defeat a block by the WR you are covering on a run play and allowing the ball carrier to get a first down is you not doing your job. It also sets up another chance for the offense to attack you and possibly get a key play in the game. There’s no joy in locking down your receiver if your team loses the game.

Without a doubt, this is a huge way to affect the game. Anyone who watched Tyrann Mathieu play ball for LSU knows this. While offenses may have wanted to avoid him, they could not because Mathieu would show up on a run play, dig his hands into a ball carrier’s arms and rip the ball out. IN two seasons at LSU, Mathieu forced 11 fumbles and recovered eight of them. On top of that, he ran back two of those recovered fumbles for touchdowns in key games his final season. While teams were avoiding him, he didn’t just sit back and watch the rest of his teammates play, Mathieu ran into the middle of the action and either made tackles or caused fumbles. There are plenty of stats out there to suggest that a team that forces a fumble in a game wins a majority of them. The more, the merrier when it comes to fumbles.

Kicking back and taking the night off when plays aren’t coming directly at you is not the way to go. You only have but so many games each season and in your football playing career. Your mentality has to be go 100 mph every time your are blessed to take the field. Make the most of every contest and every opportunity. What you will learn once you adopt this mindset is that the ball has a way of coming to you when you hustle. Do all you can to get your team to victory.