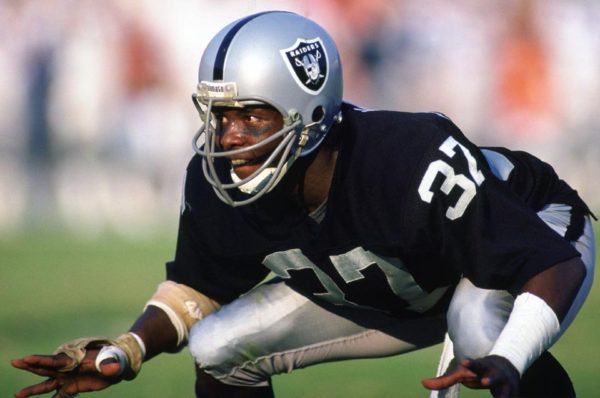 The NFL has certainly produced it’s fair share of “characters” over it’s long rich history and when it comes to being a character,  few out did Lester Hayes.

Hayes was a 5th round draft choice by the Oakland Raiders in 1977 out of Texas A&M.  What few people may know is that Hayes was a defensive end as a freshman at Texas A&M.  He would move to linebacker during this sophomore year and then onto safety where he played during his final two seasons for the Aggies.  Hayes would earn All American honors his senior year at safety after pulling down eight interceptions.

After signing with the Raiders in 1977,  Hayes would make yet another move and that was to cornerback.  At cornerback,  Hayes would become an all-time great and one of the cornerstones on defense for a pair of World Championship Oakland Raider football teams (1980 and 1983).

After that 1980 season,  Hayes was largely avoided by opposing QBs and that resulted in only 14 interceptions over the final six years of his career.  IN total,  Hayes would make the Pro Bowl 5 times and become All Pro once (1980).

Hayes was known not only for his on field production but for his odd look and strange behavior on the field.  His wide and extremely low stance was often talked about but not as much as his use of the substance known as “stickum”.  Stickum was introduced to Hayes by Raiders WR Fred Bilenitikoff.  Stickum,  as the name would suggest,  was a sticky substance that WRs would apply to their hands to aid in catching the ball (gloves weren’t a thing back then).  Hayes would often spray himself down all over his body with the substance.  Eventually it drew wide complaints from opponents and it resulted in the NFL banning stickum after the 1980 season in which Hayes had 13 INTs.  Some say the banning of stickum made Hayes less of a defensive back.  Of course,  that’s open to debate.  Hayes used a combination of aggressive play and great instincts to find himself in the right place at the right time many times.

When his career was over,  Hayes had 39 interceptions,  all as a member of the Raiders.  He is tied with Hall of Famer Willie Brown for the most in Oakland Raiders’ history.  Not bad for a former defensive end and 5th round draft pick.