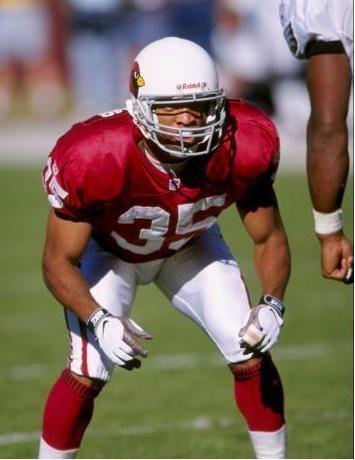 There are DBs that got a lot of attention during their NFL careers and there are other great ones that seemed to get very little. Former Cardinal’s cornerback / free safety,  Aeneas Williams would fall into the latter category.

Williams was not a college football star at a top program who had a history of being in the spotlight before entering the NFL.  However, one thing Williams did have was a great knowledge of the game and a knack for knowing what the other team was going to do.

Williams took a non-traditional route to the league.  Williams entered popular historical black college Southern University based on his academic achievement in high school.  At Southern,  Williams focused on his studies and only took up football after he graduated his junior year.  As a graduate, Williams played his first ever football season.  In that, his first season,  Williams tied NCAA division I for the most interceptions. Williams put together such an impressive mini college football career that the then Phoenix Cardinals took a chance on him in the 3rd round of the 1991 NFL draft. The gamble certainly paid off.

In Williams’ rookie season he tied for the NFL lead in interceptions. Over the next 10 seasons for the Cardinals,  Williams would make it to six Pro Bowls from 1994-1999.  Williams would eventually end up playing for the St. Louis Rams where he would pick up two more pro bowl trips.

Over his career,  Williams would make eight pro bowls and amass 55 interceptions.  He would also score nine defensive touchdowns and be inducted into the NFL Hall of Fame in 2014.  Williams is not often talked about because he was not flashy but his intelligence and football IQ was second to none during his era.