Use these basic drills on an agility ladder to improve your defensive back footwork. 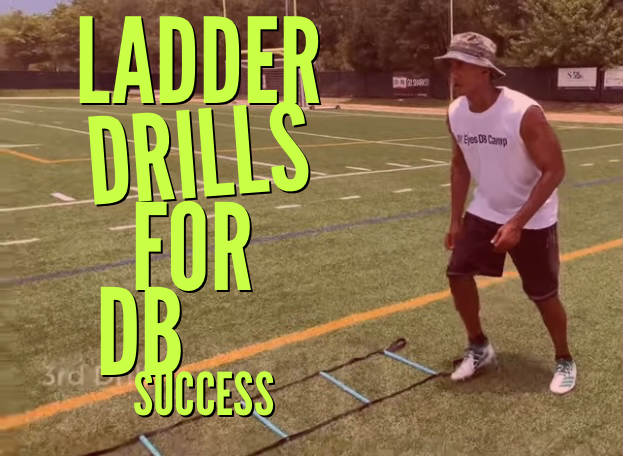 If you want great feet as a defensive back you do DB drills. I have been well known to say that. I am not a huge ladder guy and in fact I hate it when I see guys go grab a ladder and do 30 – 60 minutes of drills on it and think they’re all good. Ladder drills alone will not give you the defensive back feet that you want. I can go into why that is the case in a later article but in the interest of staying focused I will say that the ladder has a part in developing your footwork.

When I am training my athletes, I use the ladder strictly as a warm up. However, the repetition of doing these things over and over daily allows the athlete to develop some skills that are useful in game situations. With that in mind, here are the ladder drills that I like to use to help warm up my athletes and improve their footwork.

This is as basic as it comes with footwork. It’s primary focus is to get the athlete warmed up but also to rep them landing on the balls of their feet. Once you really get moving as a defensive back whether going forward or backward, the foot plant will be on the balls of your feet. This drill builds that into the athlete’s DNA.

This further warms up the athlete and the progress through the ladder by putting two feet in each hole till they get to the end. This also preps them for landing on the balls of their feet while also quickening the pace of the foot strikes. This is crucial for a defensive back that is often changing direction.

I don’t know if I will do this drill justice by explaining it in text. Fortunately for you, there is a video at the end of this article that will demonstrate it. This drill is basically a shuffle that sends the athlete from one side of the ladder through to the other side of the ladder while always having one foot in a hole with the other outside of the ladder. Again, check the video at the end. This like the two in two out drill, preps you for minimal ground contact time while adding the element of full body movement to increase the difficulty. This works your sudden change of direction footwork skills.

(5) Two in Two Out Facing the Ladder

This one is my favorite for DBs. Facing the ladder from the side, place two feet in each hole then two feet outside of the hole as you progress through the ladder. By the time you have reached the end of the ladder you would have put two feet in every hole. I love this ladder drill because it closely mimics the foot patterns that occur when you back pedal and break. It develops the core muscles involved in such a crucial move that DBs make quite often during competition.

Like I said, don’t go crazy with ladder drills as they are only a small part of your training as a DB. If you are stuck with just a ladder and a small patch of real estate with which to train with, you are best off incorporating the basic DB drills that I have in my Masters of the Basics Drill series along with your 4-5 ladder drills to raise your level of play.

Be sure to check out the video below for a demonstration of the drills outlined in this article.