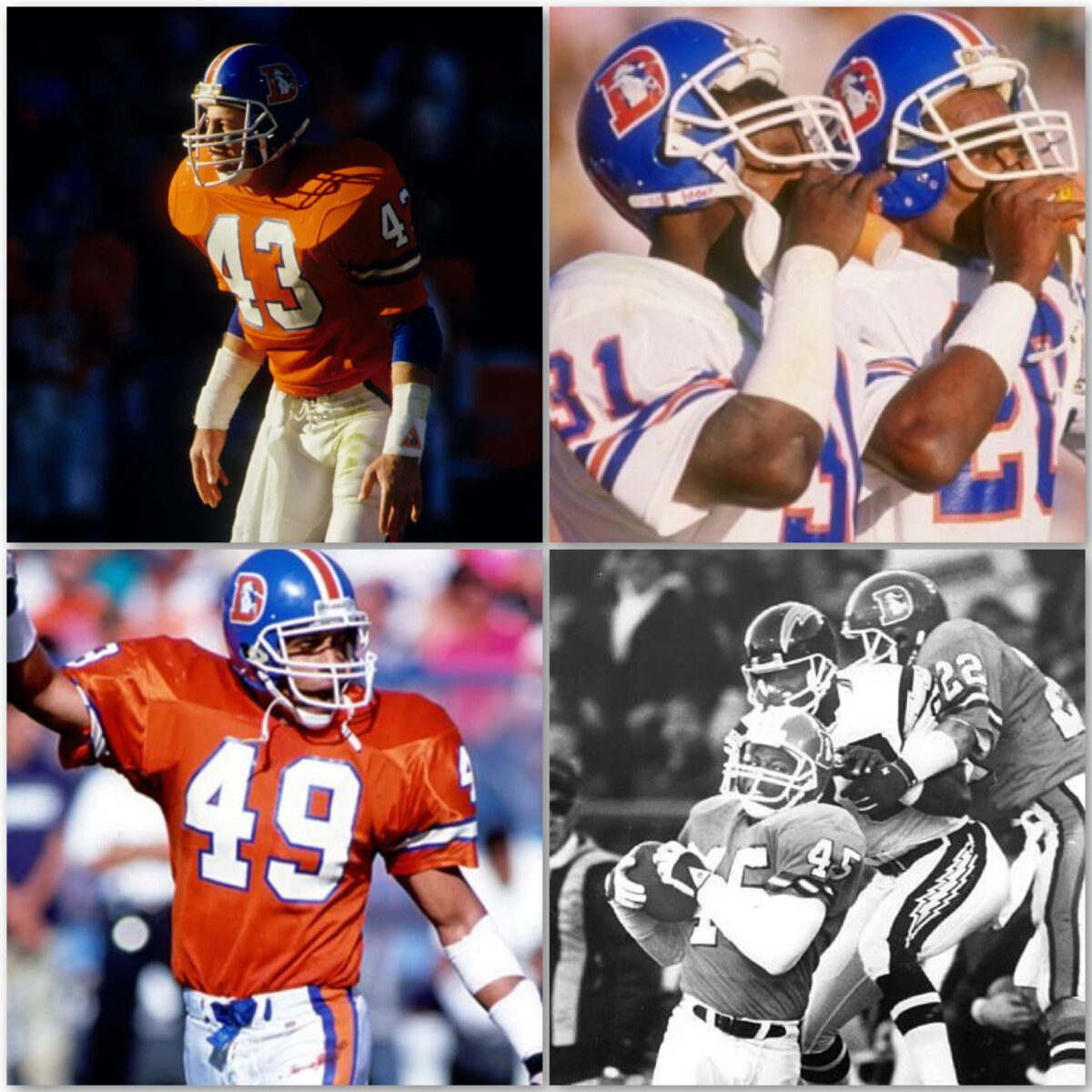 In the second installment of the Boss Unit series on All Eyes DB Camp,  I am going to talk about a team who’s defense is much maligned in the history of great defenses discussion.  This is due in large part to their inability as a team,  back in the day,  to cash in on their opportunities to win it all and that is the Denver Broncos.

It would seem strange to mention a defensive unit that was part of a team that squeaked into the playoffs as a wildcard and made a quick first round exit but let me explain.  In the 1983 draft,  the Broncos,  tired of all of the uncertainty at the quarterback position,  made the decision to trade for a cannon armed rookie out of Stanford by the name of John Elway.  Elway’s path to the Broncos via a draft day trade with the Colts is well documented and is not the topic of this article.  Whatever the case may be and however talented Elway was,  he was still a rookie in the NFL and it showed.

While Elway showed flashes of the brilliance that made him the overall #1 pick in 1983 and would eventually land him in the Hall of Fame,  his 1983 season largely looked like a typical one for a rookie quarterback.  When you toss twice as many interceptions (14) as you do touchdowns (7),  you can bet the offense was not clicking.  With that said,  if the Broncos were going to taste any success in the 1983 season,  it was going to have to be on the backs of the members of the defense.

The Orange Crush,  as the defensive unit was nicknamed,  was up for the challenge.  Denver ended the season as the 9th ranked defense in the NFL and 5th overall in team interceptions with 27.  The Denver Broncos secondary was packed with talent and out of the five starters at defensive back,  they produced 24 of those 27 interceptions.  Let’s take a look at who the bosses in this unit were.

Foley was the epitome of maligned for the Broncos.  The 8th round, 199th pick of the 1975 NFL draft out of Tulane was second on the team in ’83 with five interceptions.  Being among the team / league leaders in interceptions was nothing new for Foley.  In five of Foley’s 11 seasons (all with Denver) he had five interceptions or more.  Only once in his career did he have less than three interceptions in a season.  With his high IQ and uncanny instincts,  Foley made it a point to always be around the football.  If he wasn’t intercepting the football he was knocking it loose or punishing the unfortunate person that took a hold of it.  Consider some of the great defensive backs that have played for the Broncos over the years like Steve Atwater, Champ Bailey and Aquib Talib.  None of them have more interceptions than the franchise leader Steve Foley with 44.  Not bad for an 8th round pick who was cut by the Broncos as a rookie and played for the Jacksonville Express for a season before being reacquired in his 2nd year.

In the same draft that saw Foley added to the Broncos,  Louis Wright came on board to the Orange Crush Family.  Wright was the 17th overall pick for the Broncos out of San Jose St.  The tall and athletic corner who hailed from California was hell in press man coverage.  At 6’2″ with long arms and track speed,  Wright was difficult for wide outs to get away from.  At 200 lbs.,  Wright was not afraid to run up and smack a running back that thought he had some yards coming on his side of the field.  Wright patrolled the left side of the Denver Secondary with heavily taped forearms looking for opportunities.  In 1983 he found the most on this boss unit.  Wright had a career and team leading six interceptions while smothering their opponents’ top receiver.  Wright would make his fourth Pro Bowl in 1983 and be a strong point in the teams’ defensive rank.

Wilson formed the other half of the Steve and Steve duo in the Denver secondary.  While not the starter at strong safety,  Wilson saw a lot of action in 1983 and produced mightily when he was in there.  Wilson was tied for second with Foley in interceptions in 1983 with five.  Originally entering the NFL as an undrafted wide receiver in 1979,  Foley would eventually switch to cornerback for the Dallas Cowboys before joining the Broncos in 1982.  The 1983 season was arguably his best in the league and he fit right in to the strong Broncos’ secondary.  Wilson made good use of his wide receiver skills honed as a collegiate at Howard and his early years as a Cowboy to get into the throwing lanes and snap up passes from opposing QBs.  Wilson would end his career in the NFL with 22 interceptions after the 1988 season.

The 1983 season was only the third one for Smith who was drafted 15th overall by the Broncos in the 1981 draft.  If there was one thing Smith was known for during his NFL career it was for knocking opposing ball carriers’ senseless.  Smith traveled through the Denver secondary like a prison guard delighting in dishing out a toll on anyone not wearing the Broncos’ patented high orange colors.  Smith was a sturdily built 6’3″ 200+ enforcer but in 1983 he added ball hawk to his resume.  After a pair of 1 interception seasons,  Smith broke out with four INTs on this sticky fingered unit.  Now,  opposing wide receivers running through Denver’s secondary weren’t sure if they could get separation on the corners,  avoid leading the QB into an interception by the intelligent safeties or get knocked out by the menacing Smith.  The USC grad would enjoy a 14 year career (all with Denver) in the NFL and would be a six time pro bowl selection.  Smith is a member of the Broncos’ ring of honor and is 7th on their all time interceptions list with 30.

Harden,  like Smith,  was one of the younger members of the Broncos’ secondary in 1983.  Between he and fellow cornerback Louis Wright,  opposing receivers found it difficult to get away from the physically imposing duo. Harden was a 6’1″ long armed corner from Central Michigan.  Not a ton was expected out of the 5th round pick in the 1980 draft but Harden over delivered.  Along with providing sticky coverage on wide outs,  Harden had similar suction on his hands when the ball came his way.  In 1983 he tied Smith with four interceptions to give quarterbacks precious few options when surveying the Denver secondary.  Along with his four interceptions in ’83,  Harden would recover three fumbles and return his INTs for 127 yards to lead the team.  Harden would go on to stack together a couple of five and six interception seasons after 1983 and end his career with 38 total.  He would spend his last two seasons with the Los Angeles Raiders but his 33 interceptions as a Denver Bronco has him 6th on their all time list.

As you can see the Denver Broncos’ secondary had at least one of everything in 1983.  They had lock down corners with Harden and Wright.  They had ball hawks with high IQs in the two Steves,  Foley and Wilson.  They also had physical enforcers with Smith and Wright.  The frustration for opposing quarterbacks was real and with the offense fighting to find it’s way with rookie Elway at the controls,  the defense,  led by the secondary,  carried the Broncos to a 9-7 record and a playoff berth.  Many will forget this Denver Broncos’ air patrol unit but not me and neither should you.

I posted a great article in my Member’s Area using practice film from the Denver Broncos of this era  entitled “This Black & White Video Can Teach You All You Need to Know About Press Man“ talking about press man.  It is one of the best press man vids out there.  You can check out the article by clicking here.  You will need to be a member to read and watch it.