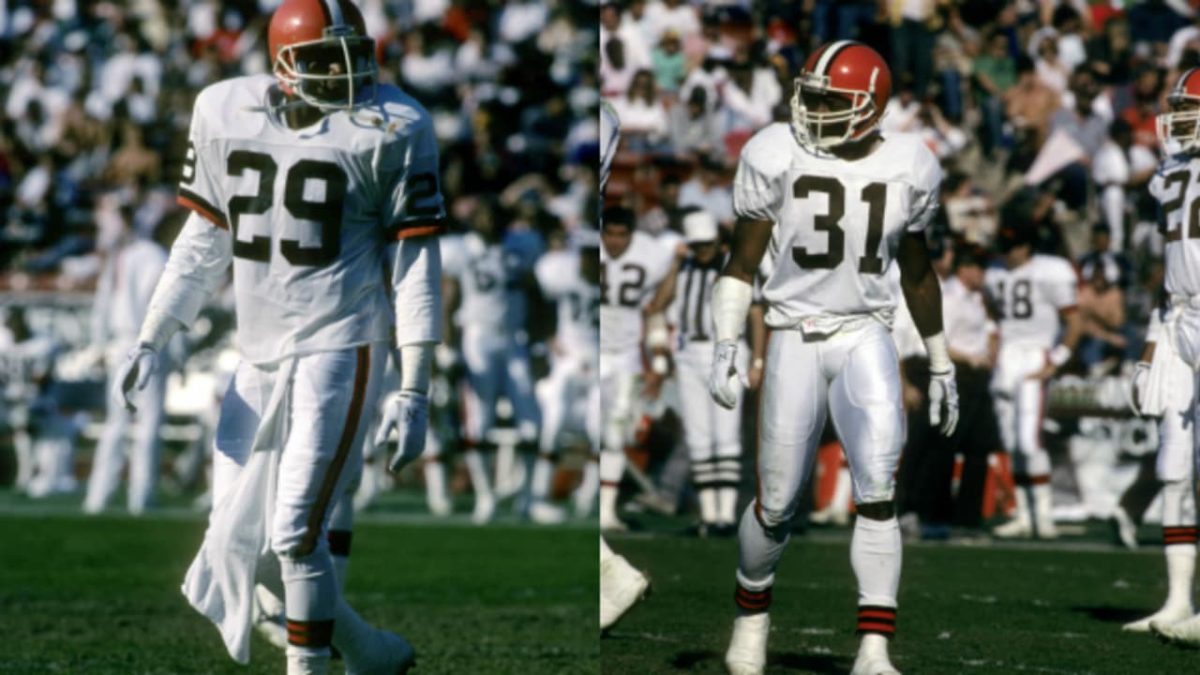 Believe it or not,  the Browns didn’t always suck.  In the mid to late 80’s the Browns were a problem and stood on the doorstep of the Super Bowl three times.  One of the biggest reasons for their success during that time was their defense and the dynamic duo of Hanford Dixon and Frank Minnifield.

If you are into stats then you won’t think much of this duo as they did not pile up the interceptions.  One big reason for that was the style of play that they incorporated.  Dixon and Minnifield were pure bump and run corners who often found their backs to the quarterback.  As such,  running up high INT totals was not their thing.  You know who else wasn’t running up stats, wide receivers that lined up in front of them.

Weekly,  Dixon and Minnifield would crowd the line of scrimmage on the NFL’s best wide out and leave them crying to refs play after play.  The Cleveland duo were on the pass catchers like fly on that brown stuff.  They looked very much like the modern era of cornerbacks with their bump techniques.  They were all about disrupting routes and getting into the heads of wide receivers,  quarterbacks and offensive coordinators. Pass break ups were not an official stat kept in their day but I can tell you from experience,  they racked them up like a teenagers racks up speeding tickets. They were truly lockdown corners who allowed the Cleveland defense to rank in the Top 10 in the NFL in 5 of the 6 years from 1984 to 1989.

Dixon was a first round pick for the Browns in the 1981 draft after a solid college career at Southern Mississippi.  AT 5’11” 186 lbs.,  he wasn’t the biggest cornerback around but his long arms and tenacity was perfect for Cleveland’s bump and run mentality.  Despite the constant bump and run mode,  Dixon did tallied up 20 INTs from 1982-1986.  He was selected to the Pro Bowl three times and was twice named All Pro.

Minnifield took a more curved route to the NFL.  At 5’9″ 180 lbs. he was considered to be too small to play in the NFL after playing for Louisville in colege.  He began his professional career in the arena league playing for the Chicago Blitz and then Arizona Wranglers in 1983 and 84.  Minnifield would join the Browns in 1984 and become a full time starter alongside Dixon in 1986.  For the next four seasons,  Minnifield and Dixon would cancel alot of flights into the Browns secondary.  Minnifield was known for his aggressive style in coverage and ability to tackle.  It all led to him being a four time Pro Bowler, All Pro in 1988 and named to the NFL’s All 80’s team.

Dixon and Minnifield were also trend setters.  From the long white sleeves to the white gloves and long white socks,  the duo had many a young DB imitating their fashion and style of play.  Dixon even made wearing a duck face mask cool and playing with an obscenely long white towel from your hip a thing.  They were a must watch each week and they are credited with naming the raucous Cleveland Brown fans as the “Dawg Pound”

Had they won one of the three AFC Championship games that John Elway’s Broncos eliminated them from in the 80’s,  Dixon and Minnifield might be a more household name for this generation.  For now,  we’ll just have to settle for them owning a place in the All Eyes DB Camp Dynamic Duo Series.