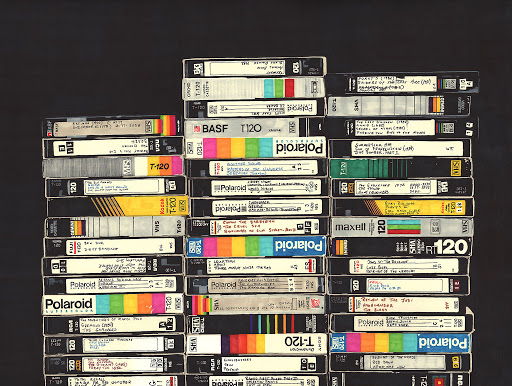 I am sure the generation before me had this same thought but you guys nowadays have it easy.  My generation had betamax and VHS if you wanted to record your television.  If you wanted to listen to your favorite song on an album you had to fast forward and rewind on a tape after you ejected it and flipped it over to the other side.

I did much of my learning about playing defensive back in high school via television.  First of all,  that meant the game I really wanted to see had to be showing in my area that day and I had to be sitting in front of the TV to watch it.  If I had somewhere I had to be then I just missed the game  unless we had something called a VHS that could I record it with.  Of course,  you had to put the recordings on a tape and those cost money.

I would refer to those tapes constantly to gain the information I needed.  When I grew tired of having to fast forward to find the plays and the players I wanted to see in action,  I made highlight reels.  To do that,  I needed two VCR machines.  I won’t go into the ins and outs of what had to be done with the two machines to make the videos just know that it involved time, patience and energy.

This current generation has a load of resources.  First,  you have the ability to see any game you want from the comfort of your own home on any Saturday or Sunday.  Second,  if you missed the game,  you can watch it again on YouTube,  NFL.com or any other number of streaming services.  Moving to the part of the video you want is as simple as clicking ahead on the progress bar or clicking on the 10 second rewind or fast forward buttons.  If I woke up one day in 1980 whatever and had that available to me,  I would have thought I died and went to Heaven.

Yet with all this available to this generation,  too many young DBs don’t simply watch football whether live or on playback.  Saturday or Sunday afternoon finds you on PlayStation or XBox.  I will give it to you,  major distractions like that weren’t available to us in my time.  It would have been tempting.  Ultimately though,  I am fairly certain that my desire to acquire the knowledge would have pulled me away from the distraction and to the games.

To be elite you have to be smart.  To get smart you have to study.  To study,  you have to just sit down and watch games.  You can observe a lot just by watching.  Sit down and watch a full game from time to time.  It is necessary to observe the flow of a game,  how plays are called,  how defenses adapt and how defensive backs operate from play to play,  moment to moment.  Cut ups are great but sometimes you just have to get the feel of a game to learn how to play it.

I realize that our current culture has a lot of  youngsters feeling that they can just drill themselves to greatness.  You feel the more you do drills,  the greater you will become.  That has it’s ceiling.  Ultimately,  your brain gives you the power to institute the moves that you learned from the drill.  You have do drill your brain too.  Drill your brain by just sitting down and watching ball.

Not only should you watch current games but when you are determined to be elite,  watch old games.  Watch games from your youth or games before your time.  Mike Tyson was a vicious physical specimen with a killer mentality.  Ultimately that is not what propelled him to the top of the boxing world.  What did that was his love for the sport of boxing.  That love led him to be a boxing historian who watched hours of tape of boxers that competed before he was born.  In training and in competition,  Tyson understood the reason for every move and moment simply because he had watched the greats before him do it.

Watching old games helps you understand how the game evolved,  why certain players excelled and how you can mold yourself into similar or even superior greatness than them.  It happens subconsciously and you just find yourself making plays.  It will seem like it’s out of the blue but it really comes from the hours of observation of the game, the position and the players.

Studying the now keeps you in tune into to what’s happening.  Studying the past helps you see the future more clearly.  If you want to reach your full potential,  cut the TV on and start watching football.