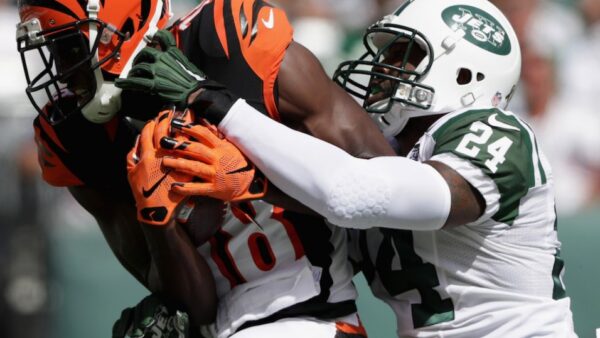 Really good batters in baseball do get in slumps but the difference between them and the average hitter is that they don’t get into prolonged slumps.  The same applies to cornerbacks.  They get into slumps too but they don’t last very long and there are some good reasons why.  Here are four things that can help you get out of a coverage slump as a defensive back.

(1) Have Good Self Awareness

Ever been to a doctor and he asks you to cough?  Or have you been to a mechanic that asks you to start the car?  Often times they can tell what’s wrong with you just by you doing those simple things.  As a defensive back,  you have to have the awareness of a doctor or mechanic.  Certain mistakes in coverage relate to certain things you are doing or not doing.  The better and quicker that you can realize that,  the faster you can make adjustments and turn things around.  So for instance,  missing the jam all the time at the line of scrimmage typically means you are letting your eyes drift up the moment the wide receiver moves off of the line of scrimmage.  Or getting stacked all the time means that you are not turning and getting up the field at the proper angle.  A really good defensive back can quickly take the result and relate it back to a specific action he is doing wrong and correct it.

(2) Study Yourself of Film

I am amazed at how many guys don’t do this.  If your practices are filmed and they should be,  you have to study yourself on film.  You won’t get better at the rate you want if you don’t go back and watch your actions on film.  Often times we are so wrapped up in the moment and the fast moving action that is happening in front of us that we don’t realize a lot of what we are doing real time.  That’s where film comes in.  Many times you will watch yourself on film and see yourself doing things you didn’t think you were doing.  Sometimes you think your coach is lying or picking on you only to watch the film and realize “oh yeah my feet are too wide”.   Listen to your coach but also watch yourself on film to pick up on things he may have missed.  After all,  you should know you better than anyone else.  After watching your movement on film,   you should be better able to make corrections.

When a batter gets in a slump in baseball,  they usually don’t go to a pitching machine to have it throw 120 mph.  You know what they do?  They go all the way back to childhood.  The drag out the tee and start hitting balls off of it.  They start all over and climb back to their hot spot.  Sometimes we get so bogged down in details and trying new things that we lose ourselves.  Also,  wide receivers make adjustments to what we’re doing and our tactics stop working as well. In the midst of trying all of these new things and trying to improve we forget the basics.  When the slump hits and we can’t get jams or we can’t get in phase or even make a play on the ball,  it’s time to go back to all the basic drills.  Re-introduce yourself to the basic things that you have probably moved away from doing.  As you do that,  you climb back to where you were before and can sometimes get clues as to where you went wrong before.  It might keep you away from the next slump that was coming your way.

You watched yourself on film and you have good self awareness so it’s time to make your corrections.  These corrections require some extra time.  Along with your daily drills and routines with your team,  you are going to need to carve out some extra time for self improvement (you should be doing this always anyway).  If your steps are wrong or your eyes are wrong, etc., spend some time pre-practice and or post practice drilling yourself on the corrections.  These problems don’t just solve themselves. It will take some extra time to get back into the groove.  So while everyone else is going into the locker room to tell lies about the girls that like them or the offers they’re getting,  stay out on the field doing the things that get the girls and the offers to roll in.