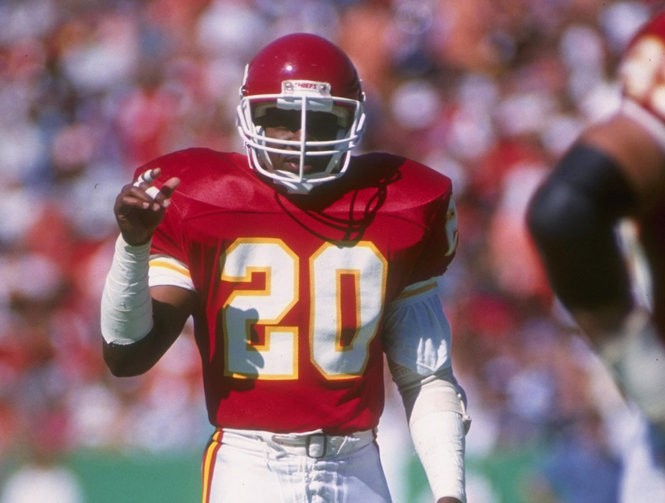 When the talk of top safeties to ever play in the NFL comes up,  Deron Cherry’s name is not one that will come to mind.  This despite the fact that Cherry’s 50 career INTs puts him in the Top 50 of all men to have ever played the game.

One of the biggest reason’s for Cherry’s lack of all time notoriety stems from the fact that the Chiefs teams that he played for were not all time greats.  Kansas City during his years often left their fans heartbroken with unrealized potential.  In his 11 year career,  the Chiefs made the playoffs just three times but that was no fault of his or the defense.

Cherry is from Riverside, New Jersey and played his prep football at Palmyra high school.  Following high school,  Cherry accepted a scholarship to play for the local college,  Rutgers University.  In his four years at Rutgers,  Cherry collected 9 INTs.  His solid play in college was not enough to whoo the NFL as he ended up signing as a free agent punter with the Kansas City Chiefs in 1981.  Yes,  a little known fact is that Deron Cherry was a decent punter in college at Rutgers with a career average 40 yds per punt.  Despite that,  Cherry’s punting was not enough to stay on the Chiefs’ roster either as he was cut in training camp.   As fate would have it,  the Chiefs would need a safety in September of that year and signed Cherry.  In October,  he would see game action and grab his first interception vs. the Oakland Raiders.

In 1982,  Cherry was used sparingly as he appeared in only seven games and started in none.  in 1983,  Cherry won the starting free safety job in training camp and started what would be a nine year assault on opposing teams’ offenses.  In ’83 Cherry tallied 7 interceptions.  He would equal that number in 1984 and 1985.   With teams fully aware of Cherry and his capabilities,  the ball hawking safety managed to top those three seasons’ accomplishments by pulling down 9 interceptions for the Chiefs.  Cherry and the Chiefs defense would lead Kansas City to their first playoff appearance in 16 years during that 1986 season.  In three of his first four seasons as a starter,  Cherry would amass over 100 yards in interception returns.  In 1988,  Cherry once again had a lucky number 7 interceptions.  Over the final nine years of his career,  Deron Cherry averaged 5.4 interceptions per season.  That number would put him ahead of many of the all time DB greats like Deion Sanders, Ronnie Lott, Rod Woodson, Ed Reed, Charles Woodson and others.  What folks from this era will also remember about Cherry was that he was a fierce hitter.  The 5’11” 200 pounder would shy away from no running back, big WR or tight end that came trotting down the middle of the field.  Cherry combined with Albert Lewis and Kevin Ross to make up one the premier secondaries in the NFL during the 1980’s.

Cherry would make the Pro Bowl six times during his career and be named All Pro 5 Times.  He is also a member of the NFL’s All 1980 Decade team.  Not bad for a former free agent punter who got cut in training camp.