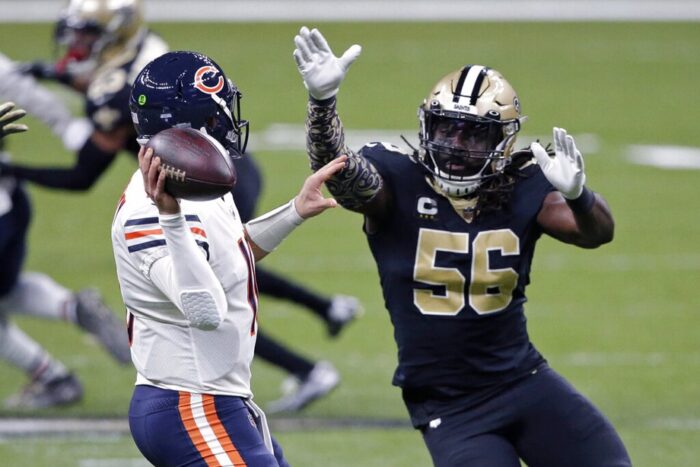 You’ve heard the saying “It takes a village to raise child”?  Well,  in that same vain,  it takes a whole unit to stop a passing attack.  In this article,  I am going to talk about one third of that unit and how they can help the back third in slowing down passing attacks hell bent on ruining your stat sheet.

Linebackers can be forgotten souls in the attempts to slow down big time passing attacks.  Often times the talk is about the amazing pass rush or the outstanding lockdown coverage by the cornerbacks and safeties.  Few times do linebackers get noticed unless they are getting handled in 1-on-1 coverage by a running back or tight end.   The truth of the matter is that linebackers are a big part of holding the quarterbacks in check and here’s how they can do that.

When everyone is on the same page,  the defense has a tremendous chance at doing what it is designed to do.  Getting on the same page has a lot to do with pre-snap communication.  Linebackers must talk to the guys around them and that includes the cornerbacks and safeties.  Communicating motions, cut splits and odd alignments are the first step in getting them defended.  When playing in a zone,  talking to the defenders around you to communicate when a player is entering their zone is a must.  When teams align in a bunch or nasty sets and you’re in man coverage,  reminding a cornerback or safety of the rules in their combo / banjo coverage could go a long way in preventing a receiver from running all alone down the football field.

Ask any defensive back,  especially a safety,  what their pet peeve is when the quarterback takes his drop and he’ll tell you that it’s the linebacker not taking his.  Some linebackers act like they have a shock collar on around their necks that will activate once they move beyond five yards from the line of scrimmage.  We’ve all seen the linebacker who retreats exactly five yards deep and starts buzzing his feet like he’s doing something.  He’s doing something alright,  he’s letting the dig, over, crossing and curl routes sink in behind him and put pressure on the safeties and corners.

Any linebacker worth a damn in the passing game knows deep drops equal interceptions.  Besides,  linebackers like to hit.  Isn’t it a whole lot easier to boom a guy when you take a deep drop and come downhill on a shallow route?  That definitely beats chasing a dig route when the ball has been thrown over your head.  You want to force the quarterback into making mistakes?  Take a deep drop into your zone and work your way down from there after the ball is thrown short.

(3)  Use Your Help in Man Coverage

Yes,  we know,  man coverage is not really your deal.  This is why most man coverages that involve the linebacker being on the field have help built into it. In the rare occasion when there is no help then best believe all hell is being unleashed on the quarterback in the pocket so your services as a man to man mercenary will only be needed for a couple of seconds.

Whether it’s a full on zero coverage blitz or something with help,  it is important to know where your friends are.  Know the coverage beyond the fact that it’s man to man.  Some guys just hear man and they think it’s them and the receiver with no one else in the stadium.  You him and 100 x 53 yds of grass.  That’s not the case.  Study the intricate parts of the defense and understand where the dropper is that you can funnel your receiver to for some assistance.  It could be a safety deep in the post or on the hash.  It could be a linebacker or safety posted up in the low hole or another defender you have combo coverage with.

Even when the coverage is zero and the defense is bringing six or more,  knowing that the sidelines or back line of the end zone are your friend is important.  Make sure you are playing the proper leverage to decrease the chance of a completion and a big play that will most likely require a defensive back to go run down.

(4)  If You’re Blitzing then Blitz

The only thing worse than the five yard pass drop by a linebacker is the two yard blitz into the line where you stop the moment you meet resistance.  In the words of the immortal R. Kelly “I’m fighting for my $&@# life man!” Defensive backs are out there doing their best to lock down some super twitchy,  highly athletic ball magnet.  They can’t do it forever so I know you are disappointed that the guard sniffed out your blitz or that the running back won’t mind his business but please continue applying pressure.  If the guard is barreled chested like Quinton Nelson,  work through half of him and get around him to at least make the quarterback move off of his spot.  If it’s the running back ruining the fun,  turn into a bully and push him into the quarterback’s lap to force an errant throw.  Whatever you do,  don’t just stand there in “no man’s land” where you aren’t in coverage but you aren’t rushing the passer either.  You might as well be standing next to coach with a headset on at that point.  Work through the adversity and help the secondary out by affecting the quarterback.

These are some simple but very effective things you can do as a linebacker to increase your worth when the balls start flooding the airways.  Being able to do these things with consistency and efficiency also makes it more likely that you will be on the field during obvious passing downs.   Effective linebackers do these four things on a regular basis.  Be a part of the village.