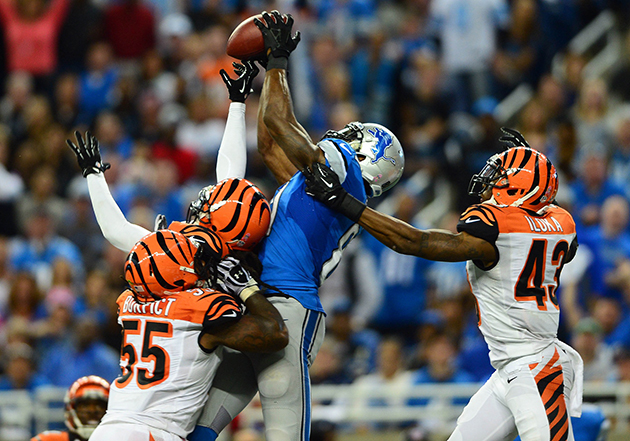 Playing defensive back ain’t easy.  I’m not telling you anything you don’t know but what can complicate your situation even more is when you enter your battle feeling defeated already because the wide receiver has an attribute that you feel gives them an advantage.

Few positions in football have seen more dramatic changes in body type of the last two decades than receiver.  Once a position resigned for shorter quicker players with speed,  wide outs have morphed into bigger more power forward looking types that have still managed to be just as fast as the little guys.

Some defensive backs get intimidated by the size of receiver.  I am not saying that is you (no one is under oath here) but if this has ever been you or someone you know,  I am going to show your 4 things you need to do neutralize the size difference and win the matchup.

The first step in winning any battle is having a keen and honest knowledge of yourself.  What are your strengths and your weaknesses.  Are you good in press?  Do you have the feet and technique to play off?  When playing press,  are you strong and aggressive or is playing soft in press your comfort zone?  Once you have a strong sense of who you are,  now you can adequately determine what tools you are going to use to matchup against your bigger opponent.

You should know how the wide receiver is that you are going to face before you get to game day.  No one wants to show up to pre-game and get completely blown away by how big the guy you have to match up against this week is.  Make sure you watch all the film available on him and use the sources on the internet to get an accurate description of his height and weight.

Next do your due diligence on his skills.  Is he strong vs. press.  Even though he is big,  is he actually physical?  Has anyone really pressed him?  If not,  he may not be all that good dealing with it.  Sometimes big guys intimidate people so much that they never really ever get tested.  For all you know,  he’s a real teddy bear.  How is he getting out of his breaks?  Is he a lumbering big guy that beats the drum and gives off clues to the routes he’s going to run?  How is he catching the ball?  Does he win most of the 50 /50 balls that come his way?  Winning this physical match-up is going to come as a result of your preparation for the battle.

Finally,  if your bigger wide receiver is really solid in all phases then you should spend a good amount of time studying the quarterback.  Truth of the matter is that the wide receiver can be big all he wants,  if his quarterback has weaknesses then you can exploit those to prevent them from making connections.  Are there routes the quarterback can’t throw?  Does he give off signals as to what is coming?  Study the signal caller.

(3) Play to Your Strengths

If the receiver is significantly bigger than you then you should have either a quickness or speed advantage.  As I said,  know yourself.  If you are a smaller defensive back,  you should already have been putting in work on your technique and IQ.  These two things should make you pretty sound in playing off man.  If your opponent is very good vs. press,  then you are going to play off against him and use your technique to cut off his routes.  Your superior feet and proper study should put you in a position to beat him to the spot on a lot of the passes coming his way.  Beating him to the spot or cutting him off from his routes can limit his effectiveness and frustrate him.

If you are really good in press despite being smaller,  use that in the beginning.  You should do that especially if you see that the bigger receiver is not very good vs press or has not had much experience against it.  You should not be intimidated from pressing him if that is what you are really good at.  Just be smart about how you deploy it.  Use proper leverage when you are in the red zone and if you have help on certain plays,  make sure you know where it is and position yourself properly.

The last thing you need to do going into the match-up is defeat yourself before the first snap happens.  If you have prepared then you are in position to win.  Now you must think like and act like victory is yours.  Truth of the matter is that size does not = win.  Preparation is what leads to victory.  If you have studied yourself and your opponent then you have what you need to make a victorious game plan.  Once that plan has been established,  believe in it and your ability to execute it.  You already know as a defensive back that receivers will win some of the battles.  What we are trying to win is the war.  Don’t get dejected if should happen to jump over you for a catch,  muscle you off the line for a play or two.  Move to the next phase in your plan and execute.  Not to sound too cliche but he might win a battle however you are out to win the war.  Stay on your plan and strong mentally.

Implement these four things into your next match-up against a big body wide receiver and watch how your open up some eyes by holding more than your own.

If you haven’t done so already,  consider getting your advanced degree in Coverology by joining the All Eyes DB Camp Member’s Area.  200+ videos on drills, coverages, tips, techniques and more.  Click here for more info.