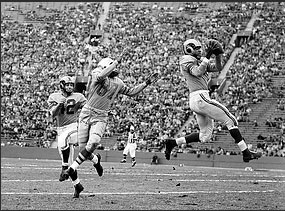 Yes swag-less you would say. Black high top cleats, no face mask and he played DB wearing #81. Be that as it may, Dick “Night Train” Lane is still the NFL record holder for INTs in a season with 14.
Some of you may or may not have known that Lane held the record and while 14 INTs is an amazing number it’s not the most amazing thing about Lane. That he even played professional football is an achievement in and of itself. Lane went to junior college out of high school for one year and then quit to join the service. After serving in the military, Lane was working at an aircraft factory and decided to try out for the LA Rams. He made the team but was quickly switched from WR to DB. In his rookie season in 1952, Lane set the NFL record with 14 INTs. What’s amazing is that not only did this come in his rookie season but in 1952, the NFL season was only 12 games long.

The original big corner at 6’1″ 195 lbs. the Texas native was not only a ball hawk but a big hitter. He ended his NFL career in 1965 with the Detroit Lions with 68 career INTs. Lane earned his nickname “night train” because his fear of flying led to him taking night trains to away games.

In 1974 he was enshrined into the NFL Hall of Fame. Not bad for a guy who never played college football and was a converted WR playing DB. Despite NFL game schedules being expanded to 16-20 possible games, Lane’s record of 14 INTs in a season still stands. Sometimes the path to success is not a straight line but with a vision and perseverance you will find the way.