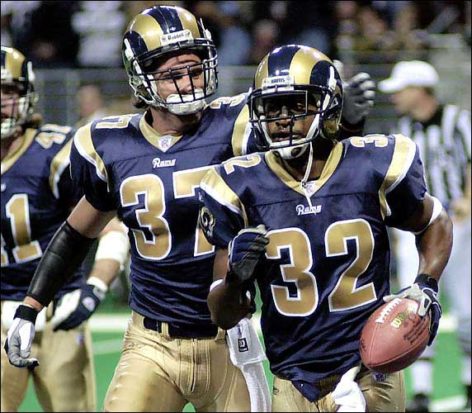 I have a treat for all of my sub 6 footers playing corner today.  This one is long overdue but it is here now.  If there was one guy that played this game that knew how to get his hands on the football consistently,  it was the one featured in this post.

Lost and forgotten in the era that saw Deion Sanders and Rod Woodson give way to Champ Bailey and Charles Woodson into Darrelle Revis and Richard Sherman was a 5’9 7/8′ cornerback out of North Carolina named Dre Bly.

How was Dre Bly introduced onto the scene?  As a redshirt freshman at the University of North Carolina when he pulled down 11 interceptions earning him All American honors.  Only five people in history have done so in their freshman seasons and Bly is one of them.  Over the next two seasons at North Carolina,  Bly tallied up nine more interceptions and left college as the Atlantic Coast Conference’s all time leader in interceptions with 20.  Alphonso Smith of Wake Forest would later break that record with 21.

Bly came to North Carolina in 1996 out of Western Branch high school in Portsmouth Virginia where not only was he an all state football player but an elite baseball player as well.  Bly would obtain first team All American honors twice while at North Carolina in both his freshman and sophomore years.  He’s the only player in ACC history to be a consensus All American twice in his career.

After three season in Chapel Hill,  Bly entered the NFL draft.  His lack of eye popping workout numbers (5’9 7/8″ 186 lbs. 4.51 (40) and 35 in. VJ) kept Bly out of the first round and ended up being the 41st pick in the 1999 NFL draft by the St. Louis Rams.  Though he was rarely a starter for the Rams during his four years with the club,  Bly had big production.  Over his four years,  he started just 25 games but had 14 interceptions.  He returned three of those interceptions for touchdowns and totaled 247 yards in interception returns.  In his rookie season,  the Rams won the Super Bowl.   After four seasons,  Bly left the Rams and signed with Detroit where he became a full time starter.

Bly spent four seasons in Detroit and averaged nearly five INTs per season.  He returned two of his 19 picks for touchdowns and made the Pro Bowl twice.  He was also an All Pro in his first season with the Lions.

Bly would then move on to Denver for two seasons pulling in 7 interceptions there and then three INTS in 2009 as a member of the San Francisco 49ers.  Bly would eventually resign with Detroit in 2010 before retiring that year.

In all,  Bly would total 43 interceptions in his career which is more than names like Lester Hayes and Darrelle Revis.  Bly would also score 8 touchdowns as a pro while tallying up 652 interception return yards.  In 2014, he was elected to the College Football Hall of Fame.

Currently,  Bly is the cornerback’s coach for the North Carolina Tar Heels.