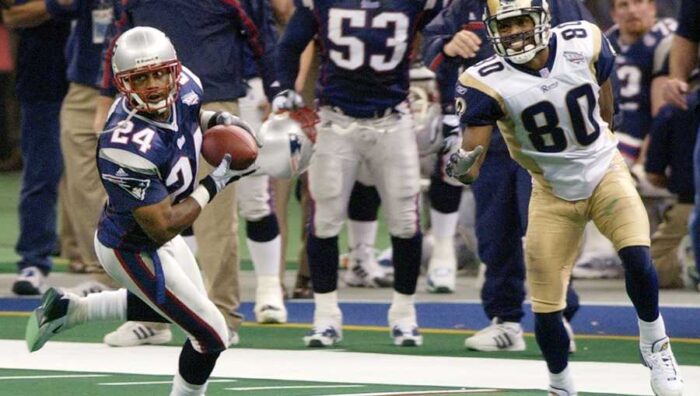 By now the New England Patriots have developed a nice reputation for developing and producing solid cornerbacks in the National Football League.  However,  there is an entire generation that doesn’t know or won’t remember the man who kicked it all off.  That man’s name is Ty Law.

Football fans’ discussions about who was the best from the previous era usually centers around names like Champ Bailey,  Charles Woodson and right before them Deion Sanders or Rod Woodson.  Lost in the greatness of those individuals is a lockdown cornerback named Ty Law.  Who knows why some guys’ greatness gets kicked under the table but have no fear,  All Eyes DB Camp is here to place Law’s resume front and center back onto the desk.

Law began his football career in Beaver Creek,  Pennsylvania at Alquippa High School.  What should shock you is that,  Law was the first of two NFL Hall of Fame cornerbacks to come from that same high school.  Also hailing from the same halls of Alquippa was everyone’s favorite 1-on-1 cornerback,  Darrelle Revis.  Perhaps Revis had a man to look up to as he was coming up because Ty Law was it.  Law as a three sport star at Alquippa,  playing football,  basketball and running track.  Like Revis after him,  Law would be a solid basketball player and be named his team’s MVP.  In football,  Law played all over the place for the Quips.  His time on the gridiron saw him line up at safety,  cornerback,  running back and wide receiver.  Following his high school career,  Law would sign with and attend the University of Michigan.

In Ann Arbor,  Law had a solid but unremarkable career.  He would letter three seasons and did make All Big Ten his final two seasons but he was not a Thorpe Award winner or Heisman Trophy candidate like his fellow Michigan alum that came after him,  Charles Woodson.  Law was good enough though to enter the NFL draft after this junior year and saw his time for the Maize and Blue end with 8 career interceptions.  In the 1995 NFL Draft,  Law would be picked 23rd overall by the New England Patriots and coach Bill Parcells.  Ironically,  Law would play for three Hall of Fame coaches while playing for the Patriots,  Parcells, Pete Carroll and Bill Belichick.

Law would become a starter midway through his rookie season and go on to nab three interceptions during his initial campaign.  He would duplicate that three interception performance the following year as the Patriots went to the Super Bowl.  When new coach Pete Carroll came to town,  Law would have yet another three interception season and tally 11 pass break ups.  His fourth year would be what you could call his breakout year.  In 1998,  few,  if any,  could say they were better than Ty Law.  In a league that had the likes of Deion Sanders, Rod Woodson, Charles Woodson and Eric Allen playing in it,  Law surpassed them all with 9 interceptions to lead the league.  That would earn him his first Pro Bowl selection and a $50 million contract the following season.

Law’s budding NFL career would reach rock star status though when William Belichick came to town in 2000.  A master of defensive schemes,  Belichick crafted and unleashed a weapon in Law to quell opponents’ passing attacks.  Law would find himself matched up on opponent’s best wide receivers and would severely limit their effectiveness.  Explosive offenses like the Peyton Manning Indianapolis Colts started to sprout up and Belichick used Law extensively in his scheme to frustrate them.  The sticky coverage by Law was an integral part of the early Super Bowl runs by the Belichick Patriots.  In 2001,  the Patriots won their first Super Bowl and Law played an important part picking off Kurt Warner in the game and returning it 47 yards for a touchdown.  Just the season before,  the Kurt Warner led Rams ran through the league with their high flying passing attack and won the Super Bowl.  In five seasons with Belichick,  Law would earn three Super Bowl rings,  make the Pro Bowl five times and be named All Pro twice.

In 2005,  Law’s time with the Patriots was up and he moved on to division rival the New York Jets.  Showing everyone that he was not done yet,  Law turned in his best statistical year as a pro collecting 10 interceptions for 195 yards and 1 touchdown for 74 yards.  He would also add 18 pass deflections to the stat sheet to go along with a fumble forced and another recovered.  For the 2nd time in his career,  Law would lead the NFL in interceptions.

The lockdown defender from Alquippa HS and the University of Michigan would go on to play four more years in the NFL with the Jets, Chiefs and Broncos before retiring in 2009.  In 15 years as a pro,  Law would rack up a ton of honors.  This included three Super Bowl titles (4 appearances), 5 Pro Bowl selections,  2 All Pro honors,  All 2000 NFL decade team and in 2019 named to the Pro Football Hall of Fame.   Law’s career can stand up to anyone else who has played the game at the position of cornerback.