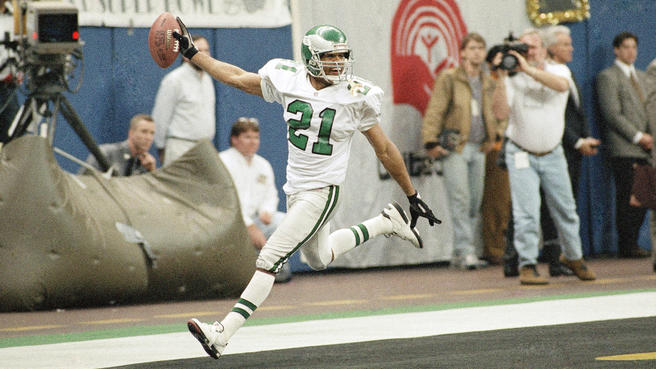 One of the more overlooked defensive backs in the history of our game is the one I am featuring today.  When you had 54 career interceptions as a pro your name should be circulated more when talking about the greats but that’s just not the case.

Most young defensive backs tend to idolize guys that look like and are built like them.  Well,  for the sub 6 foot cornerback club,  Eric Allen is a guy you should be looking up and taking after.  Eric Allen’s biggest mistake in terms of pub was playing during the Rod Woodson,  Deion Sanders era and not being that flamboyant.

Allen grew up in San Diego,  California and played high school ball at Point Loma HS.  After high school,  he would sign a scholarship to play for Arizona St. in the then Pac-10.  All Allen did during his Sun Devil career was make plays.  In four seasons at Arizona St.,  Allen would pulldown 16 interceptions including 8 his senior season with two ran back for touchdowns.  You would think that would be enough for him to win the Thorpe Award that year but he wasn’t even a finalist.  That season the award was given to both Bennie Blades of Miami who had 10 interceptions the season before and followed up with 5 on a national championship team and Rickey Dixon who also had 8 interceptions and played for high profile Oklahoma.  The other finalist that year was some dude named Deion Sanders.

Allen’s performance in college wasn’t even enough for him to be a first round pick.  Allen was a 2nd round pick by the Philadelphia Eagles (pick 30).  Three defensive backs went ahead of Allen in that draft;  the aforementioned Blades and Dixon along with Terry McDaniel from Tennessee that was drafted by the Raiders at pick number nine.  Allen was 5’10” and 180 lbs. at the NFL combine which is not too different from McDaniel but McDaniel was a track star and thus more coveted.  Nevertheless,  Allen would go on to have a better NFL career than all three men accumulating almost as many interceptions as all three men combined (54 to 55).

As a pro,  Allen would become known for his sticky coverage and knack for getting his hands on the ball.  Having an immediate impact,  Allen would grab five interceptions as a rookie then follow it up with eight during his sophomore campaign.  He quickly established himself as a top cover man in the league.  His crowning year as a pro came in 1993 when he grabbed six interceptions running them back for 214 yards and an amazing four touchdowns.  This included a ridiculous 94 yard interception return that was one of the all time NFL greatest pick sixes (see video below).

After seven years as an Eagle,  Allen would go on to play for the Saints and Raiders.  In 1998,  Allen would tear his ACL while playing for Oakland and miss the final six games of the season.  Two years later,  Allen would again rise to the top of his game and grab six interceptions,  running three of them back for TDs.

In 14 seasons in the NFL,  Allen would total 54 interceptions for 826 yards with eight touchdowns and 789 tackles.  He was chosen for the Pro Bowl six times and was on three All Pro teams.  As I said,  Allen was not the flamboyant,  flashy type.  He just went about his business and did not make headlines off the field.  In my opinion,  Allen joins Everson Walls as two of the biggest non NFL Hall of Fame snubs at the defensive back position.  Between two men that’s 111 interceptions without a bust in Canton. 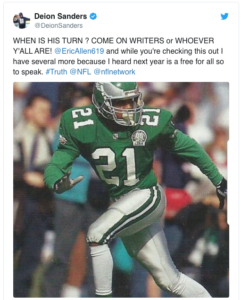