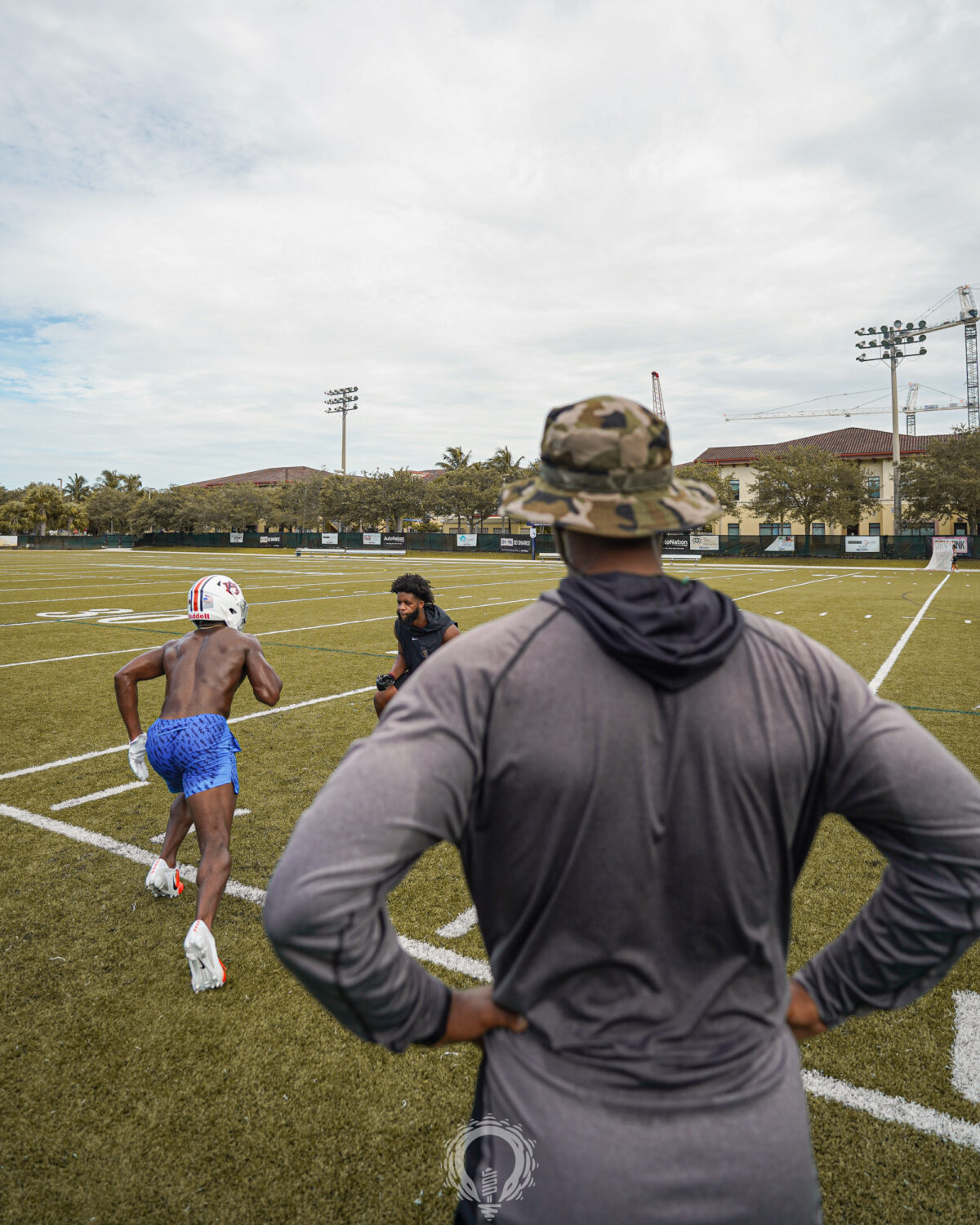 There he was,  the other team’s top wide receiver and the best pass catcher in the county jogging out of the huddle to his spot on the left side of their formation.  Tasked with keeping a handle on his explosive output,  I trotted over to line up on him.  If you are playing present day high school football,  what I did next would seem odd.  If you are learning how to play the position on your own then not so much.

As the tall angular wide receiver got into his stance ready to zoom off,  I took my position, one yard off and one yard inside of him.  I was also turned to the side facing him cutting off any path inside for a slant or crossing route.  Basically,  I was telling him you’re not going inside and we are just going to race down the field and see who wins.  I was pretty damn sure he wasn’t going to out run me.  It was an odd way to line up in “bump and run” coverage but it was all I knew at the time and it worked for me.

To my credit,  I did my job that night.  That wide receiver caught one pass for a minimal gain.  Oddly enough it was a slant,  the very route I was aligned to totally eliminate.  Not bad for a running back who was moonlighting as a cornerback.  My efforts, along with that of my teammates, was enough to give us a pivotal win against a league rival.  Proud as I was of my nailing my assignment then is as funny as it is to me now to think about how I lined up in press for the entire game.   Knowing what I know now doesn’t allow it to be anything other than hilarious.

What worked for me that night would not work for me as I progressed to the college level.  Discarding my dream of being a running back,  I was now a full time cornerback who signed up to play in a pass happy league known as the Big West.  My team, Long Beach State,  also featured some accomplished pass catchers and a worthy passing attack.  Lining up in front of future San Diego Charger Mark Seay cocked inside and looking crazy drew a puzzled look from the veteran.  The puzzled look after the snap belonged to me as Seay buzzed by me, stacked me and faded outside of me 50 yards down field to easily catch the pass I never saw over his shoulder.  Welcome to the big leagues.

Granted,  I shunned aside what I was taught in the early part of that first practice to unleash my “super technique” that worked so well for me in high school.  As expected,  the booming sound of my college defensive back coach piped in like a jet engine roaring overhead after Seay caught the ball.  It was time to learn how to play cornerback for real.  Athletic talent alone was not going to be enough.

The most important thing for a defensive back as he progresses through the levels (youth, high school, college and pro) is to acquire as much knowledge as possible.  Just as it is important for you to grow stronger and get faster,  it is important to get wiser.  Great defensive backs are hungry for knowledge.  It really is the food that fuels your future performance.  There are many aspects to playing the position and the game.  If you aren’t hungry to maximize your knowledge in each facet of the game then you will end up being that guy cocked inside trying to win versus elite competition.

At no point should it be ok for you to leave a stone unturned in the area of learning the game.  Once you’ve thoroughly grasped your techniques,  it’s time to learn the defense.  Once you’ve learned the defense,  it’s time to thoroughly understand what the offense is doing and on and on and on.  You will not reach your full potential as a defender if you aren’t constantly seeking information on how to play.  When they say curiosity killed the cat,  they were not talking about defensive backs.

Thinking back on my experiences as a high school defensive back and how gaining knowledge so dramatically improved my game is the major reason I got into coaching and now training.  I have dedicated an entire online member’s area to educating players not only in my local area but nationwide and internationally.  I am fully aware how discovering techniques, drills, coverages and info on how offenses operate can take your game to the next level.  If I were playing today,  I would not be caught at the line of scrimmage without it.

With that said,  allow me to shamelessly plug my member’s area as I feel it is extremely important for defensive backs to use it.  I am contacted all the time by players and coaches from all over who have used it to improve their game,  their coaching and thus their results.  Ultimately,  that is what it’s all about.  So,  if you are interested in reaching your full potential as a player or coach,  I urge you to consider joining the knowledge base I have set up for you on this website.   After all,  cocked to the side cornerbacks in press coverage just look funny.   Click here to join the All Eyes DB Camp Member’s Area.