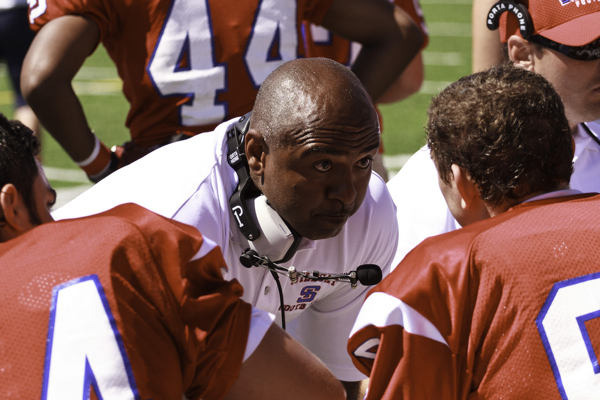 When Your Coach Is Talking, Look at Him

Coaches talk,  that’s what they do.  Coaches are teachers and like teachers there is an overwhelming need to speak as that is the major way to communicate information to both those who seek and need it.  In order to get that information,  you,  the student, needs to listen and one of the best ways to do that is not just with your ears but with your eyes.

Your coach is communicating to you with his mouth via speaking.  What you didn’t know is that he needs you to communicate too and the way you do that is with your eyes.  Here’s what your eyes are saying while the coach is speaking.  If your eyes are looking down at the ground they are saying “what you are talking about coach is really not that important to me and I don’t need to listen to it.”  If your eyes are looking at the coach then it is saying “coach what you are saying is important and I need to know it.”  If your eyes are looking off into the distance at something else that is going on then you are saying “coach please hurry up and finish talking, I really don’t want to be hearing this and by the way,  don’t trust me on game day because the same way I am not paying attention now is the way I will not pay attention in the game and cause us to lose it.”  I bet you didn’t know your eyes said all of that.  However,  your coach can hear it loud and clear.

Coaches play who they trust.  Plain and simple.  When you are in high school and there isn’t a ton of talent on the roster then the coach has to trust his talented players the most.  If you are on a high school team that has talent then your coach has options and WILL ALWAYS play who he trusts the most which means it might be a guy who is a little less talented but is trustworthy. If you are into looking elsewhere when your coach is talking, I can guarantee you that you aren’t the one he trusts.

When you reach the college and pro ranks there are a lot of talented players and now it’s just not about talent.  It starts to become about who the coach can trust. Your coach has a job to do and it depends a lot on who he puts in the game. You are responsible for the big salary he is earning.  He is not going to put the house he’s living in,  the school his children are going to and the cars he’s driving on a player he can’t trust.  A coach can’t trust a guy who won’t look at him when he’s talking.  He has no idea if you heard what he said and God forbid if you don’t know what you need to know in a crucial moment in the game.

So the next time you think you are the most talented guy but coach is not playing you,  ask yourself,  where are your eyes?