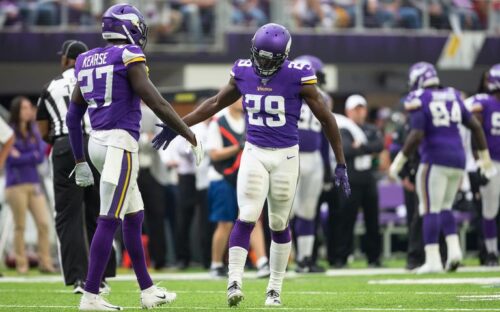 Great secondaries play together.  Great defenses play together.  This means that what one man sees so does the other.  When one mans sees it,  he communicates it to the next man.  Any plus unit that you have ever witnessed work has had a great working relationship between all of it’s members and had great leadership.  Last month,  I talked about 3 Things Cornerbacks Can Do to Help Out Safeties.  In this article,  we will discuss 3 things safeties can do to help out their cornerbacks.

Ask any cornerback and they will tell you that there’s nothing worse than standing out on the edge with the receiver ready to come at you,  the quarterback ready to receive the snap and you have no idea what coverage they are in.  Sure,  I know a lot of times in this situation the call has come in late from the coordinator.  However,  the primary job you have as a safety the moment you get the call is to communicate it to the corner to your side and then anyone else who needs it.  It doesn’t matter what you do on a given play if the corner has no idea what’s going on.  Your great coverage won’t matter if the corner is sitting in the flat because he thought it was Cover 2 when Cover 3 was the actual call.

It is in your best interest as a safety to a) communicate the call quickly and b) know the defense so that you actually know what the call is.  Sometimes the coverage is dictated or changed by the offense’s alignment and or motion.  If you don’t know the playbook or the game plan,  you may be unsure about the call.  When you are unsure about the call you are hesitant to communicate to the cornerback and now he has no idea what defense he’s in.  Certainly that makes his job harder and it won’t be long before he’s asking the coach to get you out of the line up.

Whether it is man or it’s zone,  a cornerback is hopeful if not relying on you to be where you are supposed to be.  One of the biggest pet peeves for cornerbacks is the mythical double team that doesn’t happen in quarters coverage when the safety to his side loses his threat.  Over time,  corners have learned to not depend on it but when you get a safety who reads his keys and gets there,  it makes all the difference in the world.

Similarly,  coverages like 2 Man are designed to have a cornerback give up his instinct to be on a wide receiver’s hip and instead let him beat him up the field.  When a corner plays this right in expectation that the safety will have him over the top,  it’s best you be there.  Playing cornerback has a lot to do with ego.  Getting beat deep by a wide receiver in 2 man because the safety “saw something” and wasn’t there can destroy trust like a suspect Instagram DM in your girlfriend’s account.   As a safety it is important to know the coverages thoroughly and be where you are supposed to be.  Cornerbacks are told to play to their help and maintain their leverage.  For them to have trust in what they are being coached to do,  you must be where you are supposed to be.

Run plays are not a cornerback’s favorite play.  9.5 times out of 10 the cornerback must fight off the block of a wide receiver and / or pulling guard before they get to the prize of tackling the back.  As such,  cornerbacks have their place where they are supposed to fit.  Quite often,  that fit is outside where they are asked to turn a running back back inside to the defense.  In many coverages,  the safety is responsible for that area right inside of the cornerback on a run play known as the alley.  When a safety is slow to fill that area or continues to miss tackles there,  the run plays usually strike for big yardage.  What results from this is the cornerback trying to do the safeties job.  This means that he starts trying to go inside of wide receivers’ blocks or duck under offensive linemen’s charges.  When that results in the corner getting pinned inside,  the run plays usually go for massive yardage if not touchdowns.

Typically,  the cornerback gets blamed for a run play that breaks for big yards around the edge.  To avoid this embarrassment and type of offensive attack,  cornerbacks who can’t rely on safeties start acting erratic.  As a safety,  you can avoid this by showing up in the alley with bad intentions.  Not only will it allow the cornerbacks to play the blocks the way they should,  it may make the running back hesitant to keep going in there because…. “they just not gone want that.”