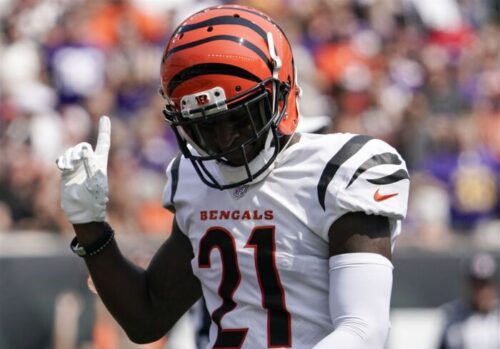 With all the footballs filling the air in recent years because of the advancement of passing in the game of football,  one position has gained more importance than ever before and that is the nickel back.

There was a time when most teams deployed 21 personnel (2 backs, 1 tight end and 2 WRs) for the majority of the game and only in third down passing situations did they bring in a third wide receiver.  In time,  that third wide receiver required a similar body type to cover the extra wide receiver and keep him quiet.  That third body type became known as a nickel back because he was the fifth defensive back.

We all know what the typical slot wide receiver looks like.  It’s usually a Cole Beasley,  Robert Woods or Cooper Kupp type.  These type of wide receivers are extremely quick,  crafty and elite change of direction guys.  To cover them,  a nickel back will need to be the same.  Having a great ability to change direction is very important when covering in the slot full time.  Routes from the slot position can be very tricky when you factor in the whips, dirties and returns.  In addition,  just your simple routes happen very quickly.  The ball gets to a slot wide receiver a whole lot faster on the slant and out routes.  Being able to determine the route and break on it quickly is a must.

Nickel backs are typically smaller types ranging from 5’8″ to 5’11”.  These are not the sizes in football that we equate with toughness but it is essential as a nickel back.  One of the major reasons for this is because although they are smaller in size,  they are playing closer to the big people.  Because nickel backs are lining up on slot wide receivers,  this means they are also in the run fit when the ball is handed off to the running back.  Essentially,  the nickel back has replaced a linebacker.  So when teams get smart and want to amp up their run game with nickel personnel on the field,  it is the nickel back that must grow some balls to take on blocks and wrap up ball carriers.

In addition,  some teams will also throw a bigger slot wide receiver into the game play to take advantage of a perceived mismatch.  Putting a big body on a smaller body gives the offense an advantage at the catch point.  A nickel back will need a certain amount of toughness to bang up against the big slot WR and make plays on the ball when they arrive.  If you are soft in the slot,  a team will eat your lunch by creating this 1-on-1 match up.

When you are in around the line of scrimmage things happen rather quickly.  So not only are you tasked with locking down a wide receiver but you are also part of the run game.  This means you must quickly decipher intersecting routes along with pulling linemen and backfield play fakes.  The action inside happens at break neck speed.  If you are slow on processing reads then you are severely limited as a nickel back.   Your coach will only really be able to use you in man to man situations and that will basically tell the opposing team what you are doing.  It won’t be long before they come up with route concepts intended to beat man coverage and confuse you.  If you want to be a reliable nickel back then you have to continue to maximize your understanding of offensive football.  Being able to see a play unfold and react in a hurry will make you an A+ defender.

Now that I have gassed you up on how quick things happen on the inside,  I do feel the need to tell you that a great nickel back will also have to have patience.  Yes,  I know,  on the surface that does not seem to go together but allow me to explain.  Part of understanding what is happening on the other side of the ball is having the patience to not move out of position when they are attempting to fool you.  Whether that is a slot wide receiver giving you 700 head fakes to get you off of your leverage or it’s the quarterback faking a hand off to then throw a bubble screen,  having the patience after reading your keys is vitally important.  Being over zealous to make a play can quite often lead you to being in the wrong place at the wrong time.  Good nickel backs believe what they see when their eyes are in the right place and have the patience to wait for the play to come to them.

As you can see,  a nickel back is in need of a range of different skills.  Once an after thought of a position,  a nickel back has accelerated past being a common player on the field to one of the most important guys on the defense.  It is important to get off the field on third down when you are playing in games and most of the time,  the nickel back is tasked with making that happen.  If you want to be valuable to your team and your defense,  go about sharpening and or acquiring the skills mentioned in this article.