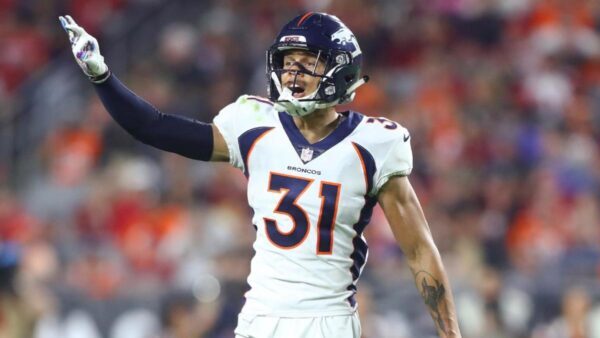 I think many of you reading this have gone paint balling with friends. Have you ever been on a team with a guy that just won’t communicate. Guys from the other team roll up behind you and they say nothing. If you have, then I am sure you know that it’s no fun getting all wet up.

When you are a part of a team, there are few things more important than communication. The amount of information that a unit can relay defensively to it’s members can mean the difference between winning and losing the down. One of the biggest things you notice when you watch a pro football team and a high school team playing or at practice is the amount of talking that is going on before and after the snap.

If you want to play like a pro, then it’s time to start sounding like one. So what kind of information are you communicating both before and after the snap?

Typical before the snap, the secondary is communicating about formation and location. Each cornerback should be calling out the number of receivers to their side. Further more, if there is a player that is spotlighted for the week and he is lined up in a location that causes an alert then they should be calling that out. Finally, certain alignments call for certain techniques. For instance, a bunch set often means that a different technique will be used whether in zone or man. Whatever that technique may be, it is important that the corner communicates with either the linebacker, safety or both. There are other things that are specific to each team that should be communicated but one thing I do know is that corners shouldn’t be silent, even when they are in man.

Safeties are faced with even more responsibility before the snap. In some defenses, they are responsible for calling out the formation. Even if that responsibility is given to the middle linebacker, the free safety should involve himself in it just as a back up. If your middle linebacker is off his game or a rookie is in there and is overwhelmed, the whole unit should not have to suffer as a result. The free safety can pick up the slack by opening his mouth and calling out the formation.

Safeties can also call out splits by wide receivers that could potentially lead to a play that could be a play on the watch list. A particular split by a wide receiver could be an indication that the reverse is coming. The corner on the other side of the field won’t see that split but he can be alerted by the call made by a safety who is communicating. This can potentially prevent a big play from happening for the offense. In addition, safeties are responsible for relaying the coverage and or any coverage checks that are necessary because of a particular formation or set.

Communication does not end once the ball is snapped. When a defense is playing zone, there is typically more communication for obvious reasons. As eligible receivers progress down the field running through zones, it is important for the players who can see the movement, that they communicate it to the players who can not. For instance, when the #1 wide receiver in a 2 x 2 set runs a curl behind a linebacker, it is necessary for the cornerback who can see it to call it out for the linebacker so he can adjust his positioning within the zone. The same for linebackers who may need to call out a flat route or alert others that a route is coming under.

Safeties who are playing deeper than everyone else on defense can see more than everybody. As the play progresses, they may need to tell other players to adjust their drop or let certain players know that they are there in position to either allow that player to fall off to another route or hold a certain leverage on a receiver.

Talking while playing defensive back is not about dishing out trash talk to get in the mind of your opponent. I certainly know that this is a part of the game and I did my fair share of it when I lined up. However, more important than renting space in your foe’s head is filling up the mind of your teammates with relevant information for their success on each play to get them in position to quiet a threat that could harm your unit. Practice communicating now with your team in your 7on7 and practice sessions. Watch how it becomes contagious then notice how the overall performance of your secondary picks up.