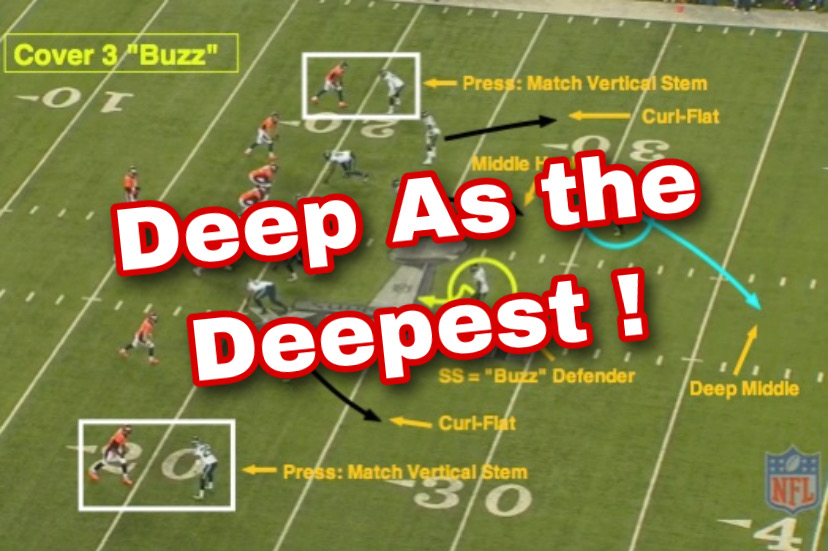 If you played defensive back and safety in particular,  you have likely had a coach tell you this when discussing a coverage.  “Be as deep as the deepest”.   There’s nothing worse than getting a ball thrown over your head as a defensive back and knowing that there is someone from the other team back there all by hisself.

For safeties there are a number of coverages in which being deep as the deepest would come into play.  If you are a true free safety then this likely applies to all of the coverages that are in your team’s playbook.   Whether you are in Cover 2, Cover 3 or something similar,  your job as a safety in those situations is to be the man furthest out from the quarterback.   First of all,  you want to discourage the throw from the quarterback and second you want to be there in the event that he develops the courage to launch one.

Most defenses are set up to take away the big play from the offense and make them “earn” their way down the field.  This means not blowing a coverage on defense that puts you underneath a receiver running deep through your secondary.  While it is important for you to know all of the coverages in your team’s playbook,  it is extra important for you to pay attention to the ones that require you to be the last line of defense.

Some defenses play Cover 3 from a two safety look meaning both safeties start off on the hash.  One of those safeties will be dropping down after the snap,  while the other will be rotating to the middle of the field or otherwise staying deep.  Other teams will play split coverages which means one coverage will be played to one side of the field while another coverage will be played on the other.  Often times one side will have a safety deep and the other will have a safety down.  In both of these scenarios,  it is not uncommon to see miscommunication as to which safety will be down and which safety will be up.   In both of these situations,  it is of extreme importance that the two players communicate with each other as well as with the defensive backs to their side of the field.  When in doubt,  stay deep and / or call out what you are doing.  It is better for you to be right and have the offense know what you are doing than to keep your responsibility a secret to the offense but make a mistake.

Another common thing that happens in coverages where a safety is supposed to be deeper than the deepest is getting caught up with what’s happening in the backfield or directly in front of him.  When the coverage requires you to be in a deep zone,  the quarterback handing the ball to the running back should not be your concern.  On a coverage like that you are not the primary force meaning you aren’t supposed to be the first one responding to a run play.  The quarterback handing or faking the ball to the running back should not stop your feet or your movement to your deep zone responsibility.  Reacting late to the run play is not an error.  There are several men that the running back needs to get through before he gets to you.  Let those men do their jobs.

Offenses are also designed to distract defenders.  To do this,  they will often run a receiver in front of a defensive back to draw his attention away from another one that is running behind him.  Defensive backs at all levels get caught by this.  However,  the most disciplined safeties are rarely ever fooled by this.  A firm grasp of your responsibilities and careful film study will keep you away from getting caught up in this mistake.  Beware of the shallow route being run in front of the deep defender.  Nine times out out of 10 it’s a hoax.

I hope that this has cleared up for some what being deep as the deepest means and has been a refresher for the vets who have been made to look like amateurs by getting caught in the scenarios I described in this article.